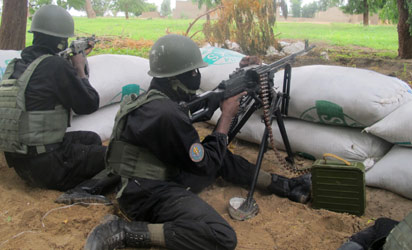 “A special cleanup operation from November 26 to 28 against Boko Haram in the border area with Nigeria neutralised more than 100 jihadists,” Defence Minister, Joseph Beti Assomo, said in a statement broadcast on national radio.

The minister did not provide details on the identities of those freed. The minister attributed the success of the raid to cooperation between Cameroon security forces, a new multinational force being set up to fight Boko Haram and Nigeria’s army. However, suspected Boko Haram militants detonated two suicide bombs in north Cameroon, killing at least three people, an official and security sources said yesterday.

“There was a double suicide attack last night in Waza in the far North of Cameroon, with a toll of six dead, including the three kamikazes (attackers),” said Michel Oumarou, the Deputy Prefect for the town of Waza.

Meanwhile, the troops of the Nigerian Army are pursuing escaping terrorists and also moving to further block any incursion by the terrorists in the North-East. Acting army spokesman, Col. Sani Usman, stated this in a statement yesterday in Maiduguri. Usman said locations recently attacked by terrorists have also been reinforced and the troops were poised to contain any eventuality.

He said the coming weeks would be critical in the operation geared toward destroying all known locations of the terrorists. “As we enter the month of December, it is important to state that we have also entered a very critical part of the fight against terrorism in our country.

“The Nigerian Army wishes to reiterate its total commitment and determination to the war against the Boko Haram terrorists.

“Consequently, we solicit for the continued support, cooperation and understanding of all Nigerians in this regard,” Usman said. He said troops in the recent operation in Gulak recovered a Toyota Hilux, several arms and items from the insurgents.