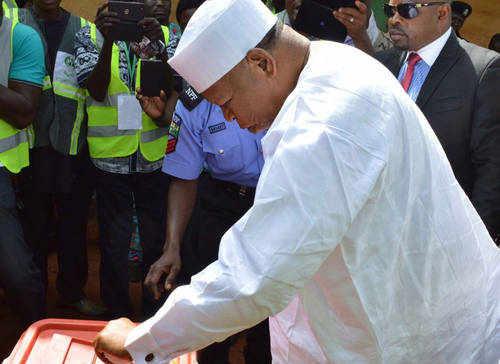 SaharaReporters has learned that Abubakar Audu, the governorship candidate of the All Progressives Party (APC) in yesterday’s election in Kogi State, died as early as 5 a.m. Nigerian time on Sunday.

“He started vomiting blood after he returned from Lokoja,” said the family source who witnessed Mr. Audu’s deterioration.

He added that Mr. Audu woke up very tired on Saturday, the day of the governorship election. He said doctors had given the former governor blood transfusion which gave him enough energy to go to the polling booth to vote in his hometown, Ogbonicha.

According to the source, Mr. Audu returned to his home on Saturday and began vomiting again. “After a while he became unconscious and died around 5 a.m. on Sunday morning,” said the source, who requested anonymity.

The family’s timeline of Mr. Audu’s death indicated that he passed on before officials of the Independent National Electoral Commission (INEC) started collation and announcement of results.

A source at INEC told SaharaReporters that electoral officials knew of Mr. Audu’s death before they announced the results of his election inconclusive on Sunday.

Mr. Audu was a former governor of Kogi who was accused of stealing billions of naira from the state’s treasury. SaharaReporters had exposed a multi-million dollar home bought by the ex-governor in Potomac, Maryland near Washington, DC.

The APC chose Mr. Audu as its governorship candidate despite the fact that he was being tried for money laundering and embezzlement of state funds by the Economic and Financial Crimes Commission (EFCC).

Mr. Audu will be buried tomorrow according to islamic rites in his hometown.

Abubakar Audu Had Complained Of A Certain Food He Ate In Lokoja On Friday, Family Sources Say

APC Governorship Candidate For Kogi State, Abubakar Audu, Will Be Buried Tomorrow In His Hometown