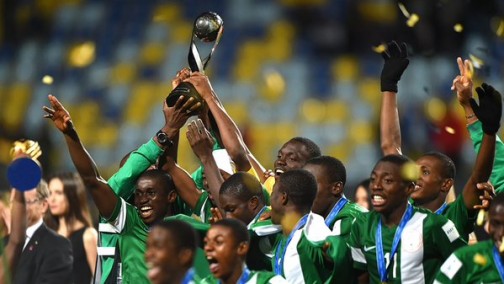 Members of the FIFA U-17 World Cup winning squad, the Golden Eaglets have confided in Nigerian Pilot that they are yet to recover from the shock after the Nigeria Football Federation, NFF handed them a paltry N20, 000 each before they dispersed in Abuja last Thursday.

“It’s surely not the best way to treat heroes. The money they gave us could not even fetch us flight tickets to take us home to see our loved ones,’’ said one of the players who did not want his name in print for fear of victimisation by officials of the football federation.

Another player said on phone yesterday: “I’ve heard about how badly players have been treated in the past. I didn’t think ours would come so soon. I am still, however, grateful to God we came home with the trophy.

The victory has opened new doors of opportunity which we are already exploring,’’ said the player who is on verge of sealing a lucrative professional contract with an English Premier League club.

Players and officials of the U-17 National Team returned to the country last Wednesday, following a successful campaign at the FIFA U-17 World Cup in Chile.

They were driven round parts of Abuja, the Federal Capital Territory in a motorcade before the convoy arrived at the Transcorp Hilton Hotel.

The new Minister of Youth and Sports, Mr. Solomon Dalong, later had dinner with the team at the Transcorp Hilton Hotel.

The team will be decamped on Thursday, to reconvene for a presidential reception which Nigerian Pilot gathered, has been scheduled for November 28 in Abuja.

The team helped Nigeria become the first country to win the FIFA U-17 World Cup title for a fifth time in Chile recently.

The Eaglets also became only the second side to retain the FIFA U-17 World Cup with a 2-0 win against Mali in the grand finale.
A key member of the team, Victor Osimhen, clinched the Adidas Silver Ball for the highest goal scorer of the tournament where he banged in a record-breaking ten goals.

Captain Kelechi Nwakali was also adjudged the most valuable player and went home with the Adidas Golden Ball award.

He scored three goals, including two penalties, and provided a further three assists, a haul that also brought him the Adidas Bronze Boot.