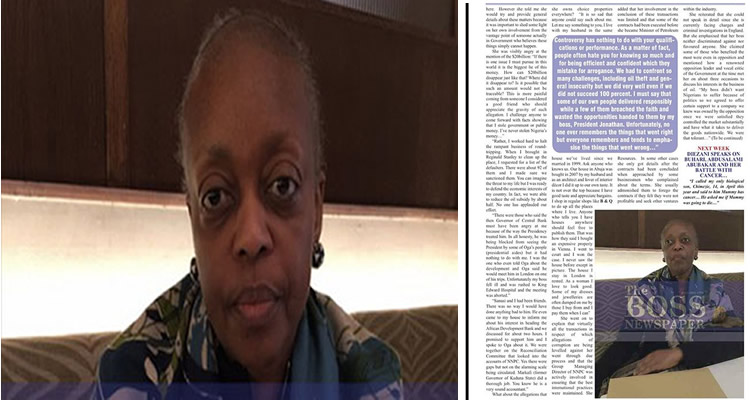 Speaking in an interview published by The Boss magazine in London, where she is battling with cancer ,the former minister described the allegation as totally untrue.

She said it was intended to tarnish her reputation as a successful and happily married woman.

Mrs. Alison-Madueke, who looks emaciated in the photographs accompanying the interview, also denied dating any of the young businessmen in the oil and gas sector.

The Jonathans, she said, had been family friends long before the ex-president came into office

She said her mother, Beatrice Agama, has always played the role of a godmother in the Niger Delta and is loved by all militants.

Asked about the relationship between her and Chris Aire, Kola Aluko, Jide Omokore, Tonye Cole, Dapo Abiodun, Wale Tinubu, Igho Sanomi and others, she replied: “I vehemently deny any intimacy or liaison with any of these gentlemen.”

She explained that some of these men were unknown to her until she became minister.

According to her, she is happily married and would not do anything to jeopardise her marriage or smear herself in the eyes of her husband, children and family.

Responding to rumours that her sister had a child for Jonathan, the former minister wondered how anyone could fabricate such tales saying, “That is totally untrue as I don’t have any such sister or relative!”

On her relationship with former First Lady, Patience Jonathan, Madueke described it as cordial, saying she accorded the former the respect she should give the wife of her boss.

On the allegation of financial impropriety leveled at her, especially the alleged disappearance of $20billion, Alison Madueke described it as a lie intended to cast aspersions on her person.

She said: “How can $20billion disappear just like that? Where did it disappear to? Is it possible that such an amount would not be traceable?

“This is more painful coming from someone I considered a good friend, who should appreciate the gravity of such allegation.

“I challenge anyone to come forward with facts showing that I stole government or public money. I’ve never stolen Nigeria’s money.

On allegations that she owns choice properties everywhere in choice capitals of the world, she responded: “It is so sad that anyone could say such about me.

“Let me say something to you, I live with my husband in the same house we have lived since we married in 1999. Ask anyone who knows us.

“Our house in Abuja was bought in 2007 by my husband and as an architect and lover of interior décor, I did it up to our own taste.

“Anyone who tells you I have houses anywhere should feel free to publish them.

“That was how they said I bought an expensive property in Vienna. I went to court and I won the case. I never saw the house before except in picture.

“The house I stay in London is rented. As a woman, I love to look good. Some of my dresses and jewelleries are often dumped on me by those I buy from and I pay them when I can.”