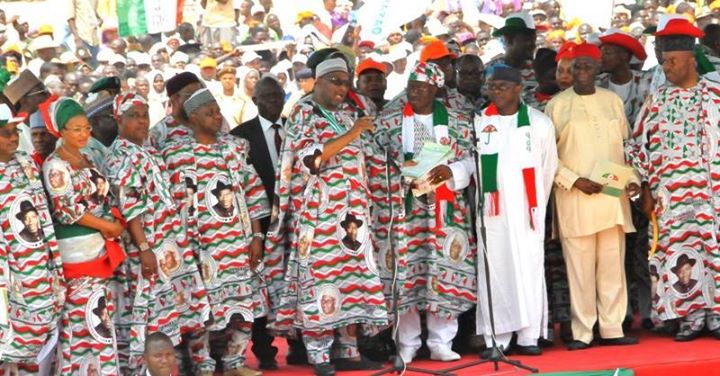 The recent apology by the chairman of PDP’s National Conference Planning Committee, High Chief Aleogho Raymond Dokpesi , for what he considers perceived mistakes of the People’s Democratic Party in its last 16 years of leading Nigeria and particularly for fielding former president Goodluck Ebele Jonathan, is embarrassing to party members and supporters of the former president. Olisa Metuh, the party’s National Publicity Secretary has also distanced the party from that ill-advised apology describing it as Dokpesi’s personal opinion.

The apology and its timing seems to serve some ulterior motives which may also include the playing of a script meant to embarrass not only the former president but also the PDP as a whole. Dokpesi is experienced enough to know that such apologies which he made to look official should actually have come from the party’s official organs after subjecting probable reasons for it to much deliberations with critical stakeholders before it can have the stamp of an official statement. As long as this was not done, that apology is nothing but an opinion of just a party member.

In making such statement, Dokpesi has proved that he lacks the equanimity and restraint of an elder needed to be trusted with high responsibilities to lead a diversely complicated but coordinated party like the PDP. He has proved that he is a man who allows such responsibilities as the one he has been given by the party now get into his head to the extent that he assumes an authority not given to him.

His easy access to the media using his AIT platform might be another factor that propelled him to rush to make such statements he was not authorised to make. The urge to have his face seen and his voice heard on behalf of the PDP made him throw caution to the wind in issuing the apology.

In highly regulated, fearless and forthright climes, Dokpesi by now should have been summoned by the party hierarchy to explain why and where he derived the authority to make such sweeping statements without first seeking clearance from constituted authorities. But we are in a society where individuals still seem to be stronger than institutions, so, one will not be surprised if Dokpesi is not sanctioned for causing the party an embarrassment that will not go away as PDP’s opponents will always make reference to the Chief’s statements in the continued unjust vilification of the party.

Let it be stated categorically clear that PDP’s choice of Goodluck Jonathan was never a mistake. The process that threw up Jonathan was a necessity. Yes, the party has a constitution and a zoning arrangement but this did not cover what happens when a sitting president dies or becomes incapacitated. That was a lacuna that the PDP zoning arrangement neither envisaged nor covered. Even at that, there was no way the party’s zoning arrangement would have superseded the nation’s constitution which spelt out in very clear terms the succession process in the case of the unfortunate demise or incapacitation of a sitting president so that even if the PDP wanted a northerner to continue and complete the tenure of the late President Yar’Adua based on their zoning arrangement, the constitution would have made such a move null and void ab initio.

The arguments, negotiations and compromise among stakeholders then show that PDP did not go out of its way to undermine any part of the country. It was just that in such circumstances it would be suicidal not to allow the provisions of the constitution to prevail. And there came Jonathan!

Rather than apologise, people like Dokpesi should actually push for the implementation of the National Conference Report and such other instrumentality that might help us fill the vacuum created by the demise of a sitting president and the process of taking over to the extent that no region will feel short-changed in the process.

In the 2015 election, it is only natural that unless a sitting president voluntarily declines or becomes incapable of standing the rigours of the presidency after his/her first term, that he should have the right of first refusal at taking a shot at the presidency for a second tenure and Jonathan did. Admittedly, PDP would have done better if they held primaries then.

Furthermore, the choice of Jonathan as PDP’s presidential candidate in the 2015 election was not just a decision of the party’s organs like the National Working Committee (NWC), National Executive Council (NEC) and the party’s National Caucus, it was the collective decision of the 12,853,162 strong Nigerians who voted for him on the day of election. Such apology would have attempted to rubbish the good work which the party’s campaign organisation in collaboration with other major stakeholders of the party did. 12.8 million people could not have made a mistake! Dokpesi is the one making a mistake here! The election was a contest between two parties, and one had to win. Dokpesi should be reminded that despite PDP’s loss at the polls, the party put up a good fight. The race was tight as APC did not win with a landslide margin.

It is said that when a lie is told repeatedly, it inadvertently becomes the truth as may be believed by undiscerning hearers. The lies of the then opposition party APC about all that the PDP and Jonathan did not do right seem to have got a better part of Dokpesi to the extent that he felt intimidated and could no longer contain himself but to just balk under the pressure of those lies.

Rather than apologise for fielding Goodluck Jonathan, what the PDP should be apologising for was allowing APC to embark on an alleged long, systematic and entrenched manipulation of the electoral process without let or hindrance or even nipping it in the bud.

But for humongous figures from places like Kano without a single voided vote in favour of APC and the skewed distribution of PVC’s to favour APC, Jonathan would have beaten Buhari silly. So, if the PDP must apologise, it is for allowing such alleged entrenched fraud perpetrated by APC and not for fielding Jonathan.

There is nothing to be ashamed of about Jonathan and his tenure. Just six months after he left office a majority of Nigerians are already beginning to regret his absence. With the benefit of hindsight, even those who conspired against the PDP in the last elections are already wishing they never did so. Having married two wives, they now know which is better. So, rather than going about town apologising for a

non-existent offence, PDP (not Dokpesi in his present capacity) should actually hold its head high for having nurtured our democracy to near-maturity to the extent that power was seamlessly handed over to an opposition party, a rare occurrence in this part of our world, thereby not only saving our democracy but also saving our country.

Olusegun Adeniyi: The Man from Biafra