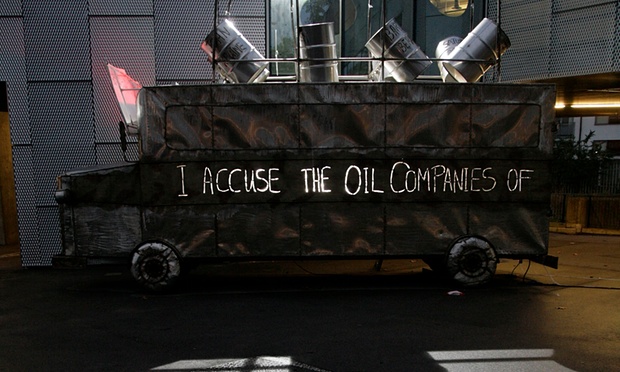 Two Ogoni ?groups have threatened a showdown with the Nigerian government if they failed to release the Ken Saro-Wiwa memorial bus allegedly impounded by the Nigeria Customs.

PREMIUM TIMES reports that the Social Action and the Ogoni Solidarity Forum at a media briefing on friday said they had exhausted “all peaceful avenues” to secure the release of the bus.

The bus, a memorabilia donated by a UK group to the Ogoni people to mark the 20th anniversary of Mr. Saro-Wiwa’s death, was allegedly seized by the Nigeria Customs on September 8th.

?Mr. Saro-Wiwa was executed by a military tribunal set up by the Sani Abacha-led junta on November 10, 1995.

?Hameed Ali, the current Comptroller-General of Nigeria Customs, was a member of the tribunal which ordered the hanging of Mr. Saro-Wiwa and eight other Ogoni environmental activists.

?”For us it’s just more tha?n? a make-shift steel bus, and we demand to have that bus back. We have exhausted every peaceful avenue we have got, and that’s why we are calling this meeting and telling you, that come the 9th of November, 2015, if the government does not release the property of the Ogoni people to the Ogoni people, the Ogoni people will take action,” said Ken Henshaw, Senior Programme Manager, Social Action.

“And we dare to say that economic activity around the area of the Ogoni nation, which includes the NNPC and so on and so forth, will be stopped. The Ogoni people are fully mobilized. We have been the ones holding them back, that you don’t need to take? this kind of action at this time. There is visible anger. We are being seen as traitors over this and we have made up our mind.

The groups’ threat came a day after the Movement for the Survival of the Ogoni People also threatened a protest if the Nigeria Customs fails to release the bus.