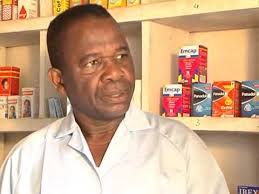 Popular Nollywood actor, Chiwetalu Agu, often acts the role of a wicked man in movies. In an interview with Nigeria’s Vanguard Newspaper, Chiwetalu explains that the negative reaction of fans towards his wicked roles is what actually led him into acting comic roles. And also explains why he grabbed Anita Joseph’s boobs in a movie.

You seem to have an affinity for comedies; why is that?

I wouldn’t call it affinity. Years ago, I found out that most of the scripts that were brought to me didn’t have comic relief; I was always given roles of a wicked man and I got to understand that most of my fans were not pleased with it. Some of them felt it was something real, and the consequence was that whenever I stepped out in public, I was caught in embarrassing situations. I then decided to be infusing comic relief even when I’m playing wicked characters because I’m a veteran screen writer. In the early 80s, we were operating in NTA Enugu, which was formerly Anambra Television Channel 50, so the talent is there, and I combined it with the wicked roles they were giving me. The result is that when you are watching me play a wicked role, you will still have cause to laugh, and ease your tension. In fact, I have achieved a lot by doing that.

Can you share instances when fans reacted to you with the belief that you’re a wicked man?

-They have done daring things. Some of their actions look like attacks, but with my experience as an entertainer, I will say I saw all that coming, so I was able to manage all of them very well. But one day, while I was on Onitsha ‘Head Bridge’ on my way to Asaba, there was this traffic snarl that made us come out of the car. One fan came to hail me and slap me on the shoulder in the course of appraising my unique style of acting. Some other persons cautioned him, and he fired back by saying, ‘Don’t you know this man is my all-in-all? He makes me happy; whenever I’m not happy, I just slot in his movie, and I become happy.’ That was an embarrassing incident, but I saw it coming because that was the period I was playing evil diabolical roles.
However, I also touch lives, because sometimes when we shoot movies, it’s like we’re telling some people’s life story. You know, talking about what happens in various families where wicked uncles deal with their nephews and things like that. But like I said earlier, I thank God that I have found a way of getting people to laugh at the same time they watch me play wicked roles.
Recently, a picture of you grabbing the boobs of an actress, Anita Joseph, on a movie set went viral; what really happened?

-They are my daughters. It was a story, and we were playing our roles. Maybe you didn’t have time to watch that movie to understand what was going on. The main character in that movie was Ini Edo who was rascally, and more of a tom-boy. If she fought with my daughters, she would defeat them, so I did everything to prepare strong grounds for them to overpower her, but it wasn’t possible. So I said since that failed, let’s look for another way to prepare them to live their lives, so that any suitor who sees them will fall in love and marry them. That way, they will be useful since they failed in fighting a common enemy. The scene that went viral was where I was dressing them up for a burial ceremony that was coming up where I expected men to see them, and to find them attractive enough to take as wives. You know women’s bust plays a very big role in attracting any man who comes as a suitor, but people who wanted sensation made the picture go viral to sell their media. If I tell you now that I help some children in the motherless baby’s home, it may not be as sensational as when they say that I raped a minor.

But how does your wife react to scenes like that?

-If I have up to one million fans, my wife will be number one. The greatest joy she derives is watching me act; no matter how negative the role is, because she is the only person that knows me better than anyone else since we live together. She knows how gentle and wonderful I am. She also knows how philanthropic I am because I always love to help humanity. So when she sees me in those kinds of scenes, she knows I’m just acting. Each time I churn out a catch-phrase, byline or slogan, she laughs so hard that even the person who is one mile away will hear the sound. She doesn’t find anything I do in films embarrassing at all; the reverse is the case.

You mean she even tells you to do it better if she feels it’s not good enough?

-Yes, she chips in her own advice on how to make my acting more comical. She knows I’m a very strong comic character; comedy is in my nature, and that is the first thing that makes her happy that I’m her husband.