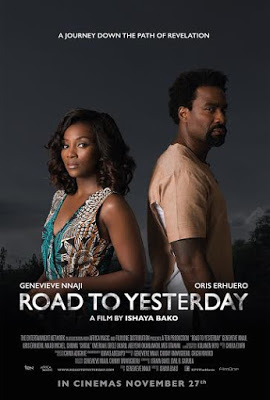 The Entertainment Network (T.E.N.) is delighted to announce that its feature film debut, “Road To Yesterday” starring Genevieve Nnaji and Oris Erhuerho has been selected as this year’s Closing Night Film at the Africa International Film Festival (AFRIFF).

Road to Yesterday is an epic love story which trails a couple desperate to mend a broken marriage on a road trip to a relative’s funeral. However, the journey itself throws up secrets from a distant past, imperiling a lot more than just the marriage.

“Road to Yesterday” was written and directed by Ishaya Bako, a London Film School Alumni, and creator of a series of highly acclaimed festival favourites, including the award winning “Braids on a Bald Head” (Best Short Film at the 2012 AMAA Awards). Road to Yesterday is Bako’s feature directorial debut.

Road to Yesterday is in cinemas nationwide on 27th November 2015. Watch trailer below…