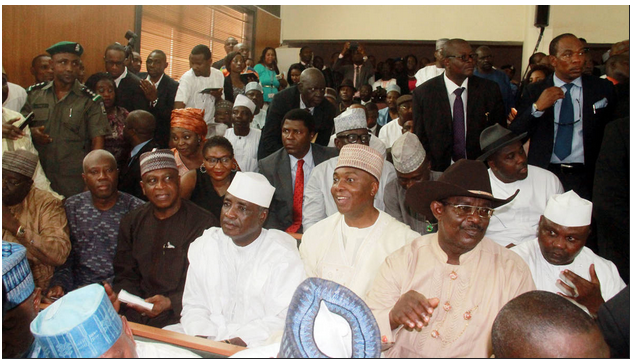 Lawyers to the Senate President have refiled a Fundamental Human Rights Application on behalf of Dr. Bukola Saraki at the Federal High Court in Abuja after a High Court in Lagos State struck out the case.

The Counsel to Dr. Saraki, Mr Ajibola Oluyede, said that the case was refiled on Friday.

The Senate President had sued the Attorney General of the Federation, the Economic and Financial Crimes Commission, ICPC, the Inspector General of Police and the Code of Conduct Bureau.

In the suit, Senator Saraki asked the court to declare that his arraignment and trial before the Code on Conduct Tribunal falls short of the African Charter on Human and Peoples Right and Section 36 of the Nigerian Constitution which guarantees his right to fair hearing and personal liberty.

He also asked the court to nullify the charges of false assets declaration pending against him.

The Senate President also wanted the court to restrain the respondents from inviting, arresting or prosecuting him on the basis of any allegation arising from his tenure as Governor of Kwara State from 2003 -2011.to

Earlier on Friday, the High Court said that the issues could not be resolved in Lagos and struck out the suit for lack of jurisdiction.