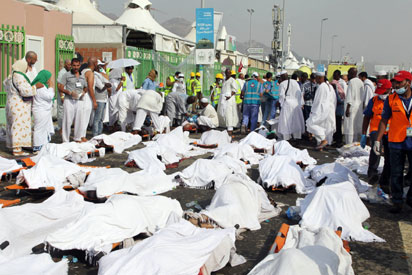 The National Hajj Commission, has confirmed that Nigerian casualties at the September 24 Muna stampede has risen to 64.

Similarly, as many as 240 Nigerian pilgrims are still missing at the time of filing this story.

In a telephone interview, Mr Uba Mana, the Public Relations Officer of the Commission, said the injured were receiving prompt medical attention.

According to him, a report containing the identities of the victims is on its way to Abuja, in line with the directive from the Presidency to the National Hajj Commission.

He said: “As soon as our medical team finishes treating the injured, we will start airlifting them back to Nigeria.”