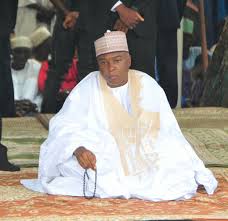 The Emir of Ilorin, Alhaji Ibrahim Sulu-Gambari, on Saturday described as an offence against God the disruption of the Eid-el-Kabir prayer at the Ilorin Eid ground on Thursday.

Sulu-Gambari, who is the Chairman, Kwara State Council of Chiefs, spoke when he paid the annual Eid-el-Kabir visit to the state Governor, Alhaji Abdulfatah Ahmed, in Ilorin.

Some protesters reportedly threw sachet water, stones and other objects at dignitaries, including Senate President Bukola Saraki and the emir among others during the Sallah prayer on Thursday.

The Emir said the attempts by the miscreants to defile the sanctity of the place of worship and deny Muslims their right of worship were condemnable and a possible invitation of the wrath of Allah, whose abode, he noted the the miscreants invaded.

The monarch added that the development was despicable and unfortunate.

Sulu-Gambari urged parents to train their children not to tarnish the good image of Ilorin Emirate and Kwara State as a peace loving and united entities.

Ahmed, in his response, said despite that the September federal allocation had not been received, his administration had paid the state civil servants and facilitated loan for local government areas to offset local government workers’ salaries.