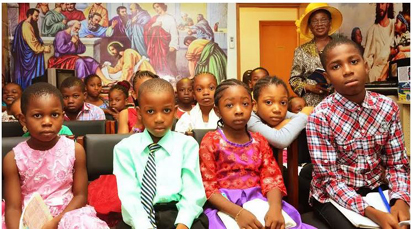 It may not be long before the Villa Chapel located within the Aso Villa presidential quarters in Abuja is relocated.

Despite denials by top officials of the administration, Vanguard Newspaper said it has uncovered how pressure is being mounted on President Muhammadu Buhari to relocate the Church where Christians worship on Sundays.

The Villa Chapel, built and inaugurated by President Olusegun Obasanjo, is said to be too close to Buhari’s bedroom and kitchen.

Obasanjo, it was gathered, deliberately cited the church beside his official residence to enable him take part in worship and prayers from the comfort of his bedroom.

However, some aides of President Buhari, uncomfortable with the location of the church, made efforts to stop the use of the facility by Christian worshippers on August 30, 2015.

Media reports, which caused nationwide condemnation, had revealed how security agents prevented the Villa Chapel choristers from entering the building for their weekly rehearsal on Saturday, August 29, 2015.

It took the intervention of Vice President, Prof Yemi Osinbajo, who reached out to his principal, before the security men left the building.

But the relocation threat to the Chapel is real. According to Vanguard Newspaper as prelude, the Children’s church, which forms part of the Villa Chapel, has been shut and some rooms, converted to shops for storing food items.

As a result of the closure of the children’s church, the children were forced to relocate to the office of the Chaplain, Pastor Joseph Sheyi Malomo, for their normal service.

“As a result of the unforeseen development, we had to collapse some facilities to accommodate the children and keep our worship going. That was why the Chaplain said that the church had not been shut but ‘we only had some procedural issues that needed to be sorted out’.