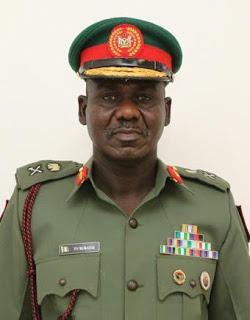 The convoy of the Chief of Army Staff (CoAS), Lt-Gen. Tukur Buratai, was Saturday ambushed by suspected Boko Haram terrorists at Faljari village between Mafa and Dikwa, during the Army Chief’s visit to Borno State, THISDAY gathered.

The attack, which left one soldier and 10 terrorists dead, occurred while Buratai was on a morale-boosting visit to the troops in the insurgent-threatened areas of Mafa, Dikwa and Logomani.

The Director of Army Public Relations (DAPR), Col. Sani Usman, confirmed the failed terrorist ambush in a statement. The statement, however, did not specifically used the word convoy, it said ‘leading column.’ He said: “The terrorists encountered an overwhelming fire power from the troops in which 10 of them were killed”, while five others were captured.

Usman also quoted the CoAS as commending the troops at 112 Task Force Battalion location in Mafa and enjoined them to continue to be hardworking and dedicated.

“During the encounter, sadly, we lost a soldier, while an officer and four soldiers sustained gunshot wounds”, he said.

The DAPR also disclosed that the arrested terrorists were being interrogated, while the remains of the ‘gallant soldier’ and the wounded soldiers were evacuated back to Maiduguri.

He also gave assurance that the wounded soldiers were stable and responding to treatment at 7 Division Hospital and Medical Services.

“At Dikwa, Usman said the CoAS interacted with a mammoth crowd of internally displaced persons where he assured them of their safety.

“Thereafter, he addressed some elements of 112 Battalion and told them that the Boko Haram terrorists should not have any freedom of action or movement within their area of responsibility. At Logomani, where troops of 7 Division Strike Group were refitting, he informed them that Nigerians were very proud of them”, he stated.