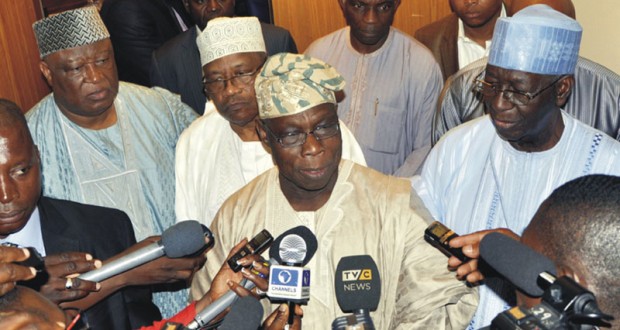 Obasanjo, a former Chairman, Board of trustees of the PDP, added that he would continue to be a statesman, without any party and also identify with any Nigerian having perceptible good leadership qualities.

The ex – President disclosed this in Abeokuta, the Ogun state capital, when the Kogi state governor, Capt. Idris Wada (retired) paid him courtesy visit at his residence.

Obasanjo, who tore his PDP membership card before camera men through a proxy few weeks to the last general elections, said it is the individual that makes the party and not the other way round.

Obasanjo said: “we should understand first that, not the party made the person, but the person makes the party. It is who you are that you bring into the party. Though for now I remain a party less Nigerian, but, I will continue to welcome any Nigerian with good leadership qualities.

“It does not matter which party you are, either, PDP, APC, Labour, APGA any party at all, as long as you a are committed, sincere and a purposeful leader, I am ready for you.

“And that is what our brother is doing. I pray that this country will never be short of this type of people. Everybody is welcome. But, they must be with good leadership traits, with genuine intention to improve the country.”

However, Wada who described Obasanjo as a father of the nation, said he was in Abeokuta to see the ex – President, having been just conferred with the best governor award in Lagos.

Wada said: “everywhere we met Baba, we learn a lot and we shall continue to learn from him. His a father of the nation. He is a figure we admire. We pray that we all will be like him, because he is a committed Nigeria, who has devoted himself to the growth of the country.

So, why not, if some of us decide to emulate him, be with him and appreciate him. Since we were honored as the best governor yesterday, in Lagos we deem it appropriate to come down to Abeokuta to report to our father, the little recognition we are getting.

“As you know, Baba Obasanjo is our father, our role model and shining example for the nation and the world at large.”

According To Wole Soyinka, Jonathan Was Caged As A President