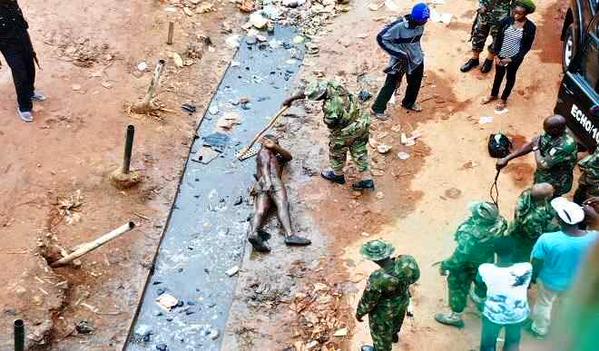 The attention of Nigerian Army has been drawn to a front page photograph of some soldiers maltreating a suspected robber at Mararraba, Nasarawa State, on the front page of today’s edition of Daily Trust newspaper.

Sadly, it is also trending on the Social Media. Pictured is the image that went viral and triggered the military’s response…

There is no doubt the photograph has done incalculable damage to the image of the service. The act was unfortunate and at variance with military ethics and professionalism. The Nigerian Army wishes to inform the public that the perpetrators of the offence have been identified, summoned and would face disciplinary action.

The Army has also reached out to the management of the newspaper over this poor and worrisome editorial judgement by giving this misdemeanour prominence in their paper. Alerting appropriate Nigerian Army authorities would have been a better option that will be met with prompt response.

We wish to assure the public that the Nigerian Army would continue to protect and respect human rights and that this regrettable incidence should not be used as a yardstick to judge the entire Army.