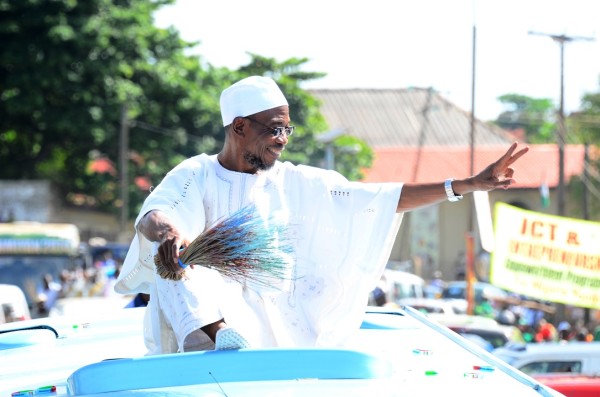 Governor Rauf Aregbesola of Osun state has described Justice Folahanmi Oloyede as a serial liar who is not fit to be a judge.

The governor while reacting for the first time in public to the petition written against him by the serving judge in the state said Oloyede accusation of financial impropriety is unfounded.

Aregbesola had responded to the petition written by thejudge to the state House of Assembly but the State Assembly dismissed it for lacking merit.

Speaking at the weekend at a party organised by the state Assembly Speaker, Najeem Salaam to mark his 50th birthday, Aregbesola took a swipe at the judge saying she has lost her integrity in the judiciary.

While accusing journalists of publicising and ‘celebrating’ the events that emanated from the petition, Aregbesola said there was no basis in the petition, hence the dismissal by the state lawmakers.

His words: “It is time for me to speak on the petition written by one of the judges in the state. I want to say that there was no basis for the petition. It’s all lies. A judge that doesn’t know herself as judge. You can only see a judge and not hear them. She (Oloyede) doesn’t have any substance in the judiciary. She lied against me.

“The journalists should have checked the financial statement of the allocation before writing their stories. Most of them (journalists) want me out of office but I will triumph over them. If I had collected N538 billion since my assumption of office, Osun would have turned to Dubai. I am happy Buhari went to USA and it was said that one million barrel crude oil was being stolen everyday.

“Is there any country that would lose one million barrel every day that would not suffer economic hardship? God will open economic doors to Osun soon. I was accused of not being in the state, I was perturbed by this report but the weekly executive meeting register proved them wrong.”

“I have never gone on leave since 1999, when I came into governance. There is no single truth in the judge’s petition. I will tell the side of my story bit by bit. I am confident that Osun will experience economic independence soonest,” the governor concluded.