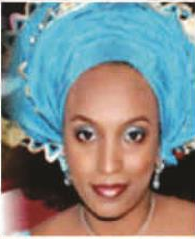 The operatives of the Economic and Financial Crimes Commission (EFCC), yesterday quizzed the daughter of the late President Umaru Yar’Adua and the wife of a former Kebbi State governor, Mrs Zainab Dakingari.

The commission had invited Dakingari, following her alleged involvement in the fraud involving the sum of N2billion in Kebbi State.

Though the agency was silent on the details of her interrogation, Mrs Dakingari was said to have arrived at the EFCC headquarters in Abuja at about 1pm and left after three hours.

LEADERSHIP Newspaper gathered that Mrs Dakingari was expected to appear before the EFCC operatives today for continuation of interrogation.

The former Kebbi State first lady had visited the EFCC on July 22, but was released to go without interrogation on the grounds of ill health.

A reliable source at the EFCC also told LEADERSHIIP last night that, “Mrs Dakingari, visited the EFCC today (yesterday) for the postponed interrogation over the N2 billion Kebbi State funds. But I can’t give you the details.