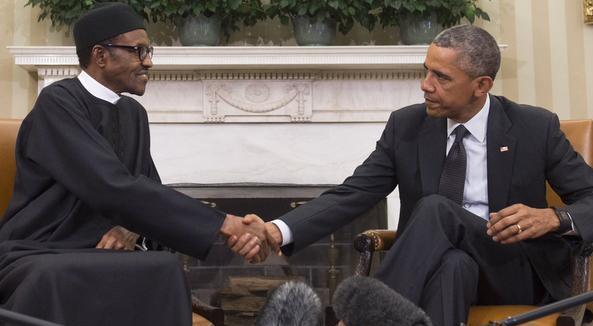 United State President,  Barack Obama has praised welcomed President Muhammadu Buhari on Monday for coming  into office with his reputation for integrity and a very clear agenda.

Obama made the remarks at the ongoing meeting with Buhari at the White House on Monday, where both leaders met to discuss how to tackle terrorism and insecurity in Nigeria’s north-east among other issues.

Obama praised the March vote as “an affirmation of Nigeria‘s commitment to democracy.”

He said the people of the oil-rich and diverse nation “understand that only through a peaceful political process can change take place.”

Obama — facing criticism for not including the continent’s most populous country and biggest economy on a Africa tour later this week that will take in Kenya and Ethiopia – turned on the charm, lavishing praise on the former military ruler.

“President Buhari comes into office with a reputation for integrity and a very clear agenda,” he said.

“And that is to make sure that he is bringing safety and security and peace to his country.”

Buhari reciprocated the praise, saying US pressure helped ensure the elections were “free, fair and credible.”

“We will ever be grateful,” he said.

Obama said successful reforms would mean that “Nigeria ends up being an anchor, not only of prosperity and stability” but, he said, the country
“can also be an outstanding role model for developing countries around the world.”
Obama said he ready to discuss “how we can be helpful” in addressing the issues that have held Nigeria back.

Still, he is unlikely to endorse a dramatic ramping up of US military activity against Boko Haram – fearing it could be used by the group as a recruiting tool and entangle the United States in yet another conflict.

Buhari To Appoint Ministers In September, Four Months After Taking Over