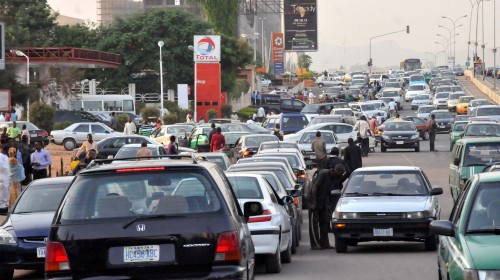 The Conference of Nigerian Political Parties (CNPP) has expressed support for President Muhammadu Buhari’s resolve to thread with care the contentious issue of Oil Subsidy.

The group in a statement of issued by its National Publicity Secretary, Mr.Osita Okechukwu , said it shares with Mr President’s resistance to all manner of temptations to remove the Oil Subsidy.

Buhari was reported as saying that he has received many literature on the need to remove subsidies, but that much of it has no depth.
The President said, “For the avoidance of doubt, when you touch the price of petroleum products, that has the effect of triggering price increase on transportation, food and rents. That is for those who earn salaries, but there are many who are jobless and will be affected by it

However, CNPP said it is confident that Buhari has the political will to plug most of the leakages, scams and unbridled corruption which enveloped the Oil Subsidy, a supposedly pro-people initiative.

“Removing the Oil Subsidy for us is like throwing away the baby and the bath water; as records clearly show that the fantastic figures gazetted by the Nigerian National Petroleum Corporation (NNPC ) and its agencies in the last five years cannot stand the test of genuine forensic audit.

“Otherwise, what are the justification for the astronomical rise of Oil Subsidy from N630 billion in 2010 to N2.3 trillion in 2012? Or the deliberate none remittance of 42% of Oil proceeds from 2012 to 2015 to the Federation Account?

“And is not unbridled corruption which botched the $23 billion Greenfield Refineries awarded on 13th May, 2010? These are refineries meant to be located at Bayelsa, Kogi and Lagos states, which could have stopped the huge loss arising from importation of refined petroleum products.

“In sum, for quick-fix, we implore Mr President to enter into partnership with genuine private investors to build refineries in Nigeria. This is the only way to employ millions of our youths, save trillions of Naira and harvest scores of derivative products which manifest from the refineries,” he said.