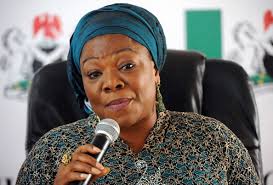 The changes at the Department of State Services (DSS), Nigeria’s secret police, entered another phase during the week with new postings and a series of reversals.

TheCable is reporting that that ?Marilyn Ogar, who was until recently DSS deputy director, public relations, has been transferred to Maiduguri, Borno state, but the posting has now been put on hold following insinuations that it was “punitive”.

Ogar, as spokesperson, was responsible for defending the activities of the agency in the media and she is believed to be paying for some of her pronouncements, notably in the face-off with the Bring Back Our Girls movement and the DSS raids on the Lagos office of the All Progressives Congress (APC) last year.

NewsWireNGR recalls that the newly appointed director general of the Department of State Security, Lawal Musa Daura, had demoted Marilyn Ogar, the agency’s former spokesperson, via a memo.

Ms. Ogar was also offered a generous scholarship to do a PhD in the UK, according to one source at the agency but she was recalled back by the agency to Nigeria on the orders of President Buhari.