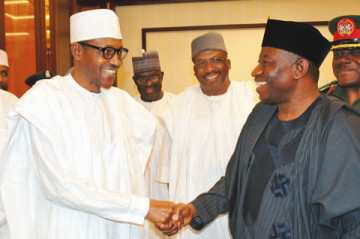 Lieutenant General Abdulrahman Dambazau (rtd) is on a mission. The former army chief has old scores to settle and he just simply can’t wait for the little nicety of President Muhammadu Buhari appointing him into an office before he starts. He has a team of men with institutional memory of the federal government.

Lawal Musa Daura, a former Director in the State Security Service (SSS) who Nigerian Times learnt is embittered with his former employers over his retirement, Abdullahi Mai-Kano; another retired SSS officer who got booted out by Col Aare’s administration for failing several tests.

These people who have launched a war of revenge on the Department of State Services (DSS) also allege that the leadership of the security outfit were not disposed to Buhari’s candidature against former President Goodluck Jonathan in the last presidential election.

As a result of this, Nigerian Times learnt that they embarrassed the Director General of the DSS, Ita Ekpeyong when they turned him back from a meeting with the service chiefs last Friday at the Villa.

Dambazzau particularly told him he was not invited for the meeting and should leave. Nigerian Times also learnt that if he had not gone, they would have labelled him as a disloyal man.

A source in the Villa with a clear view of the emerging power relations, told Nigerian Times that these people are so powerful that they decide on some issues and implement them without consulting the President. The first major error they made is the ban they put on AIT for “the role it played during the campaign before the elections”.

Recall that this act brought heavy bashing on the president from Nigerians of all class. “Eventually it left the president embarrassed because they never anticipated that the action would generate so much controversy,” the source explained.

Pushing their war against the DSS further, the group rejected and caused to be turned back a set of newly posted personnel to replace those who worked with President Jonathan. But refusing Ekpeyong entry to a security meeting with the President has been their biggest statement of intent yet.

It is routine for the service to replace its men who protects the President anytime there is a new Head of State with new personnel.

It is a common thing if a president completes his tenure or not continuing to send new people to the villa to replace the old ones, however these men prefer to use private body guards to protect President Buhari.

Presidential protection by body guards are the responsibility of secret service worldwide and constitutionally belongs to the DSS in Nigeria.

“Sadly, because of bad blood drawn during campaign, this group of people deliberately imposed men of NAIC (Nigeria Army Intelligence Corps) who are not trained for that purpose as the Presidential bodyguards. They are planning to discredit Mani the Chief Security Officer in front of the President in order to bring in Mai-Kano who despite being a retired SSS man is touted as not qualified for the post because the rank from which he was retired is not commensurate with the post” the source told Nigerian Times.

The source also said, “They are said to be uncomfortable with the appointment of Femi Adesina as the Presidential spokesperson. To this end, they have resorted to indirectly make him to be redundant, knowing fully well he may decide to resign because of personal integrity. This is noticeable in the discrepancies sometimes in press statements issued with those of Garba Shehu their preferred spokesperson.

“The powerful trio are empowering workers of a private company that was used to provide security for General Buhari before his election to have free access to villa and even be part of the BGs to PMB. The implication is that this may endanger the president and expose him to attacks.

“Another massive error being committed by these people is the appointment of unqualified people to sensitive positions in the presidency. This is evident by the poor preparation and inadequate briefing of the president before he visited the G7 summit where he referred to Germany as Western Germany. PMB would have been properly groomed for the meeting if handled by professionals.

“Putting wrong people in wrong positions because they worked for the actualisation of PMB’s presidency will highly impact negatively on his administration. A case in point is the planned appointment of one of theirs as the DG SSS. They should have other means of compensation rather than toying with sensitive government institutions.”

The Punch recently reported that arrangements have been concluded for the Nigerian military to take over the activities of the Strike Force, which is a special security outfit saddled with the responsibility of protecting the President and the seat of power and currently comprises only officials of the DSS.

Another source who spoke to the newspaper said a Lieutenant who will be leading 21 other military personnel had already been transferred to the Strike Force with an instruction to take over from the DSS officials.

He said, “DSS officials are the ones that have been serving in the Strike Force. “With this development military personnel will take over from them henceforth.

Operatives attached to the Strike Force are always trained abroad on counter-assault and other techniques aimed at making their jobs easier.

In explaining their duties, the source said its operatives were the ones former President Olusegun Obasanjo erroneously referred to as snippers in his widely-publicised open letter to former President Goodluck Jonathan.

Another official, who is aware of the arrangement, also said that machinery had also been put in place to change the new Presidential Villa’s Administrative Officer, who was deployed by the DSS about two weeks ago and replaced with a military officer.

He said all DSS officials currently serving inside the Presidential Villa were not sure of their fate yet.

“The truth is that we are not sure of anything yet. Whichever way, we will only act based on signals from our headquarters whether to leave or remain inside the Villa,” he said.

Meanwhile, a major disagreement broke out on Friday between DSS officials drafted from the Presidential Villa, Abuja to the National Mosque, Abuja and some officials of the private security firm earlier referred to.