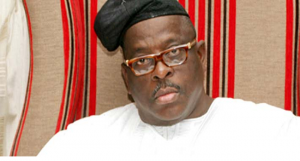 Senator-elect, Ogun-East, Prince Buruji Kashamu, was said to have threatened to kill himself if officials of the National Drug Law Enforcement Agency (NDLEA) forced their way into his house, yesterday, claiming there was a court injunction against the NDLEA’s action.

“The agency has commenced extradition procedures against Senator-elect Buruji Kashamu in line with the laws of country. He has been in contact with his attorneys and will appear in court on Monday.

“The residence of Buruji was raided by narcotic operatives at about 5am today.

Kashamu’s media aide, Mr Austine Oniypkor, described the siege on his principal’s house as illegal, dismissing the claim that the NDLEA had arrest warrant to that effect.

In a statement, Oniyokor said: “ Yes, at about 4:30am, some men, who claimed to be from the NDLEA, surrounded the Lekki Phase 1, Lagos residence of Prince Buruji Kashamu to allegedly effect his arrest following a purported extradition request from the US.

“This latest onslaught is a confirmation of the alleged plot to illegally abduct him in spite of the pending suit against this illegality. As a matter of fact, the court has ordered parties in the matter, including the NDLEA, to maintain the status quo until judgment is delivered on Wednesday, 27th May, 2015.

“We have confirmed that they do not have a warrant of arrest, just as the office of the Attorney General of the Federation (AGF) and Minister of Justice has said that it did not give any order to carry out this illegality. We have confirmed that this illegality is being designed and executed by Chief Bode George whose wife is the Director General of the NDLEA, all in a bid to score cheap political points.

“We urge all well meaning Nigerians to prevail on NDLEA, Chief George and his wife to toe the path of the rule of law and follow due process. Nigeria is not a Banana republic! The United States (US), being the bastion of democracy, the rule of law and due process should not lend itself to this kind of illegality”.