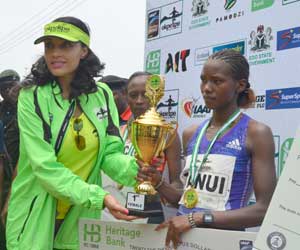 Iara, the newly wedded wife of Governor Adams Oshiomhole, governor of Edo state, has performed her first official role as the first lady of the state, less than 24 hours after her wedding.

Iara in the company of her husband presented trophies and medals to winners at the Okpekpe Road Race.

Tanui Aifele and Alex Korio both from Kenya, took the female and male titles of the 3rd edition of the 10 kilometer Okpekpe Road Race, after finishing in 33.34 and 29.20 minutes in their respective categories.

Vanguard Newspaper reports that Kenyans won three positions in the female category and two out of the first three in the male category. The winners in both categories went home with $25,000, $15,000 and $10,000 respectively.