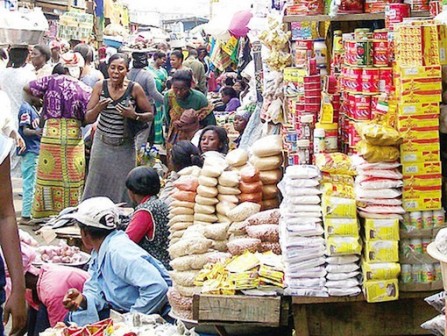 Some manufacturers and experts on Thursday in Lagos decried the trend of labeling Nigerian goods as made-in-Asia or made-in-China.
They said in separate interviews with News Agency of Nigeria in Lagos that most of locally manufactured products like shoes, bags, packaged food, and clothing were now labeled made in China to attract more patronage.

Mr Frank Jacobs, President, Manufacturers Association of Nigeria (MAN) said that it was an ugly trend that was common among small and medium scale manufacturers entering the nation’s the market.

He also said that it was a major challenge that was limiting the competitiveness of Nigerian products and urging manufacturers to desist from the act.
“We hear of such things as shoes and bags made here in Aba, Nigeria being labeled as Made-in-US just to attract the attention of Nigerian buyers.

“Somehow, the consumers also share a part of the blame as they carry a poor perception about made-in-Nigeria goods, and simply ignore them.
“This is very bad for our economy, and it is high time people knew that most of the things they buy are now produced in the country and not in Asia.

“We hope that dumping of foreign products are one of the major issues the new government would address, as it is really a contributing factor to this issue,” he said.

Also speaking on the issue, the Lagos Zonal Coordinator of the Consumer Protection Council (CPC) frowned at the trend, saying it was killing the manufacturing sector.
He said that manufacturers of such products should be caught and punished, as they were selling the nation’s ‘birthright’.

He urged the government to pursue the proposed Local Patronage Bill or any other policy that could encourage Nigerians to patronize made-in-Nigeria goods.

Miss Kene Rapu, Chief Executive Officer of SBK Shoes, a local shoe manufacturer said that manufacturers who labeled their products wrongly suffered from low esteem.Rapu said that Nigerians were beginning to embrace locally-made products and as such labeling products in foreign names like popular designers was not needed.

She said that if the trend continued, it could destroy the image of the manufacturing outfit and that of the country in future.

A fashion designer, Mr Olakunle Afinni, Chief Executive Officer, Avinni Clothings said that he was proud to label his ready-made clothing items as ‘Avinni Nigeria’ unlike some of his counterparts who did otherwise.

“I make the clothes myself and supply to online shops and all my customers know that it is made in Nigeria, yet they patronize me.

“But if you can allow a Nigerian tailor make clothes for you, I see no reason why we should not wear made-in-Nigeria shoes, so I guess it’s the attitude of Nigerians that make them do that,” he said.

Mr Remi Bello, President, Lagos Chamber of Commerce and Industry, (LCCI) said that dumping of goods from other countries was a contributing factor to the trend.

Bello said that aside the review of interest rates on loans for small and medium enterprises (SMEs), power supply, remained a major issue that needed to be addressed.

He, however, urged the manufacturers to improve on the quality of their products and packaging, to make the locally made products presentable.
He also urged the incoming government to lay down stiffer penalties for illegal importers of prohibited products and increase waivers for exporters.

Mr Olusegun Aganga, Minister of Trade and Investment had in 2014, during a forum, said that the government was proposing a Local Patronage Bill which would encourage the patronage of locally-made products.

He said that the manufacturing sector needed a lot of supporting policies to break the hold of counterfeiting and dumping that was choking the market for local manufacturers.

NAN reports that President Goodluck Jonathan had in 2014 raised an awareness to increase the patronage of made-in-Nigeria goods, named ‘Buy Nigeria’ and this, according to some manufacturers helped to boost patronage of their goods.