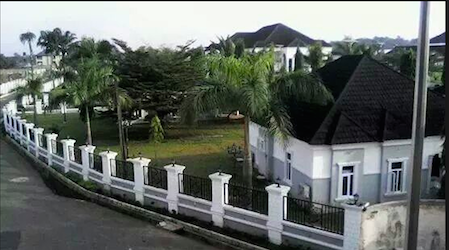 General Buhari had shortly after the Presidential elections on March 28,  paid a visit to Gov. Okorocha in Imo State as part of his “Thank You” tour.

Sources told Pointblanknews.com that Okorocha who personally received the President-elect at the Owerri Airport alongside members of his cabinet and chieftains of the APC on April 7, drove General Buhari to his Umuodu Mbieri, his hometown.

On arrival at Umuodu Mbieri where his palatial mansion is located, a shocked General Buhari was said to have asked his host “is this the Government House”?

An excited Okorocha, beaming with smiles, according to a source who was onthe entourage, was said to have responded, “no, this is my house.”

Okorocha’s response according to the source who does not want to be named, immediately brought a mean smile from the retired General who said, “kai, you are a criminal.”

The President-Elects response elicited laughter but the source told Pointblanknews.com that General Buhari would not want to be associated
with such opulence in his administration.

“This is something GMB does not want. He has openly and secretly told some APC members that he will personally deal with any member of the Party who lives above his means and he is serious about it.”

Governor Okorocha who allegedly boasts to visitors and members of his cabinet that his mansion is finer than Aso Rock Presidential Villa, was reported to have completed the Presidential Mansion which has a Ranch, a big estate and multiple buildings within three years.

The Imo Governor allegedly and forcefully acquired the 10 hectares of land using Government powers and selling same to himself. Sources said he completed the Presidential mansion within the first three years of his tenure and most times performs official businesses there.

A Lebanese Construction firm whose name could not be ascertained before going to press built the sprawling mansion at a cost estimated at N1 Billion.