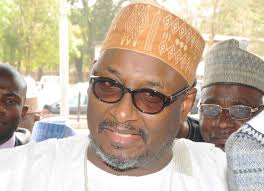 Ekiti State Governor, Ayodele Fayose, says the National Chairman of the Peoples Democratic Party, Alhaji Adamu Mu’azu, was not totally committed to the party during the elections, claiming that Mu’azu even had a secret meeting with the national leader of the All Progressives Congress, Asiwaju Bola Tinubu.

Fayose said this during a programme on Channels TV titled, View from the Top, on Monday.

He said, “Shortly before my election, he (Mu’azu) was to see me and I waited for him in his house for about five hours and then he came out to say he was sorry and that we should give him space. He said the Yoruba people should give him some space because he was expecting someone who did not want to see any Yoruba man.

“I left his house but kept a tab on him. His house is like a ring road and I came back to find out who had come to see him and the person was Asiwaju Bola Tinubu. That is the truth. When I returned to his house, he told me that I should not be annoyed that it was Tinubu that came to visit him.

“I was worried because the Ekiti election was just five days away and I almost lost my breath.”

Fayose stressed that Mu’azu was not committed to the party as he was often absent when the party needed him the most.

He noted that the President-elect, Muhammadu Buhari, won the presidential election because Nigeria wanted a change.

He, however, argued that Buhari garnered a majority of the votes in the North because the people of the North felt it was their turn to rule and President Goodluck Jonathan, who is from the South, should not have been in power because the late President Umaru Yar’Adua did not complete his tenure.

Fayose said despite Buhari’s massive northern support, the PDP should have been able to get more than 10 per cent of the total votes cast in Bauchi State.

He wondered why the PDP failed to get up to 10 per cent of the votes in Bauchi State despite the PDP having a sitting governor, a minister and the national chairman as indigenes of the state.

He said, “The day the presidential election held, the chairman was not in the country. On the day the names of our candidates were to be submitted to the Independent National Electoral Commission, our chairman was in Lagos, on his way to Singapore.

“I was with President Jonathan on that day and I told him to call him. The President did not know that Mu’azu was in Lagos on his way to Singapore. Even when he travelled recently, he said he had a problem with his left hand and wanted to travel abroad for treatment.

“However, he called some people and told them that he had deceived the President. You must be consistent in character. I am saying everything on camera; let him come out to deny these allegations. I don’t want to be in a PDP where we have betrayers of all sorts.”

I Will Expose Anybody That Offers Me, Other Senators ‘Ghana Must Go’ — Ben Bruce, Senator-elect Talks Tough