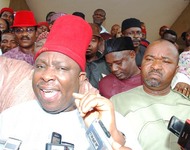 Leaders and members of the All Progressive Grand Alliance, APGA, across the country are set to embark on a protest to President Goodluck Jonathan’s hometown, Otuoke in Bayelsa State, over the refusal of the President’s aides to release election largesse, promised them before the last presidential poll, to them.

The National Organising Secretary of APGA, Dr. Gbenga Afeni, said this in a statement issued to newsmen on Monday.

Afeni said the party was promised some amount of money before agreeing to support Jonathan’s re-election, lamenting that the APGA members had yet to receive the promised fund since March 28, when the presidential election took place.

He alleged that the party was shortchanged the same way after supporting Jonathan during the 2011 presidential election, which he won.

The APGA chieftain said at least, 100 members from each state of the federation and the Federal Capital Territory were planning to march to Otuoke even after Jonathan’s exit from Aso Rock to register their displeasure with the breach of agreement by his aides and party leaders.

The statement read, “Arrangements have been concluded to march at least 100 party members from each state of the federation and the FCT to Otuoke, the hometown of President Gooluck Jonathan.

“The purpose of the march is to protest the breach of agreements in 2011 and 2015 general elections. In 2011, APGA supported Jonathan and the PDP to victory and the PDP promised to form a government of national unity inclusive of APGA but the B0T of the PDP, after the election, schemed out APGA from any political appointment.

“Also in 2015, we supported President Jonathan and PDP, but till date, those saddled with the responsibilities of liaising or reaching out to political parties have not shown up by way of appreciation to APGA.”

Afeni said APGA leaders had suffered much embarrassment as their followers were daily demanding their share of the election largesse from them.