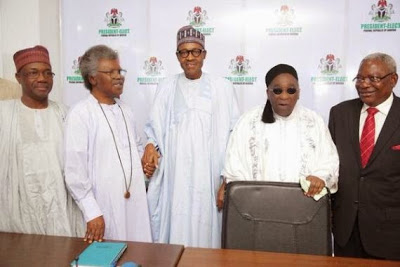 President elect, Gen Muhammadu Buhari says his cabinet members will be made of only technocrats with the prerequisite experience to serve in whatever capacity they are called in to serve.

He said this while speaking with members of the Northern Elders Forum who paid him a courtesy visit in Abuja earlier today. Gen Buhari said he will choose men and women that will drive his government towards meeting the aspiration and dreams of every Nigerian.

He however called on Nigerians to give him and his team some time to achieve all they have promised. He stated that they will concentrate on Education, Security and Employment creation.

Sources tell NewsWireNGR, that the President-elect’s desire to go for technocrats and those that can deliver informed his decision for rejecting the list of Ministerial nominees by All Progressives Congress governors.

The APC governors, led by Governor Rochas Okorocha of Imo State, had, last Tuesday, visited Buhari in Abuja to pledge loyalty and make some demands when they submitted a list for nomination in keeping with the Peoples Democratic Party, PDP tradition of appointments.

But General Buhari was said to have rejected the proposal and declared that the Constitution does not mandate him to take a list of ministerial nominees from them, according to a source at the Defence House.

Meanwhile, there’s ongoing in fighting between General Buhari and Senator Bola Ahmed Tinubu who is said to have been ignored by the President-elect shortly after the 2015 elections.

Buhari who sources say wants Lagos state governor, Babatunde Raji Fashola in his cabinet, Tinubu is seriously kicking against the appointment of Fashola so his hold in the South-West is not whittled down .

“Tinubu has other people he wants to lobby their names for appointments but Buhari doesn’t want any other but Fashola, the way it is going, GMB will likely go out of his way to nominate Fashola as Tinubu no longer command such powers…

“If you saw the Inauguration Committee lists, you will know that no one cares about Tinubu any longer, Baba doesn’t care either” Our source who spoke with us in a phone conversation explains…

More details on why Tinubu is sternly moving against Fashola to be published in our subsequent reports, do follow @NewsWireNGR on twitter and Facebook for more…

Polls Defeat: “I Hope Patience Will Not Divorce Me” – Pres. Jonathan Confirms NewsWireNGR Report About The Face-Off With Dame