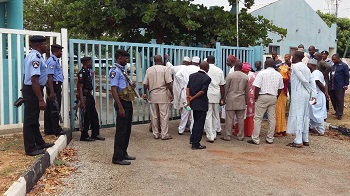 Speaker of the Niger State House of Assembly, Hon. Adamu Usman, was on Tuesday, impeached by nineteen, out of twenty-five members of the House.

Meanwhile, it was  reported that as early as 7:30am, over 200 armed policemen and other security agents were seen keeping vigil at the Assembly as they prevented everybody from gaining entrance into the complex.

However, some desperate members of the House, who defied the presence of the armed security men at the gate and forced their way into the assembly complex after damaging the key and the chain used in locking the gate.

In his acceptance speech, the new Speaker, Hon. Kawu commended his colleagues for the honour.

He also called for people’s understanding and appealed that no erroneous meaning be read to the change in leadership of the house.

Hon. Isah Mohammed Kawu was first elected Speaker in 2012 but was impeached after one legislative week.

Related Topics:politicsImpeachmentLegislatureNiger State House of Assembly
Up Next

Soyinka Slams Predictable Voting Pattern Of Easterners: ‘Igbos Vote Based On Their Stomach And Have An Incurable Money Mindedness’