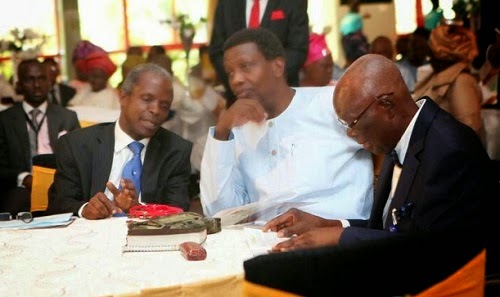 The vice-president elect, Professor Osinbajo is at the ongoing RCCG May 1st Holy Ghost service where he came out to testify of the goodness of God. Here’s what he said while addressing the congregation tonight;

“We were campaigning for over four months on air, road, rail, everywhere and God saw us through, protected us and kept us from harm. And on the 28th of March, God crowned our efforts. I thank God for the special gift and I thank God for marking me out as a person and giving me the position of the vice president elect. This is a fulfilment of Daddy G.O’s prophecy earlier this year that RCCG pastors, ministers, wiil be used by God to change Nigeria,” he said.

Meanwhile, Professor, Yemi Osibanjo, yesterday disclosed how the Muhammdau Buhari administration would prosecute the anti-graft war, saying that Nigerians must question sources of wealth of the rich.

He made the statement while delivering the keynote address at the Abuja edition of The Platform, an annual event organised by the Covenant Christian Centre, while stressing that the incoming administration would ensure zero tolerance for corruption by reforming the Justice system.

According to him, within the last few years, the country had experienced a situation where people got away with corrupt practices, but going forward; the incoming government would make sure that corrupt people suffer the consequences of their actions. He said when people are made to suffer the consequences of corrupt practices it will send a strong message to everyone that the era of looting of the treasury is over.

“We have always talked about zero tolerance for corruption, but it is also important that people are made to understand that there will be consequences for corruption.

“People have to explain, for instance, if you are a public servant, how come you have 50 houses. Somebody needs to ask you those questions and some of the reasons people get away with that is our criminal justice system.”

One of the reforms queued for early execution is in the judicial system, Osibanjo commented, adding that the nation’s judicial system as presently constituted is slow, and this has made it easy for people to get away with criminal acts.

“Our criminal justice system needs to be fixed. The system is slow and it almost always ensures that people who have been charged with offences [are] forever and after a while people forget that they are on trial.

“We have to fix that criminal justice system to ensure that criminal trials are speedy and that anyone who is guilty of an offence will be punished for that offence.

“Now if you add those awaiting trials, it comes to about 50,000 but actual convicted people are just 12,000. Truly it shows you that there is a failure somewhere in our criminal justice system.

“The truth is that the system of protection, investigation and trial of people is wrong and the truth is that everybody gets away with criminality in Nigeria and I think there is a need for us to review the system such that it begins to work.”

On policing, Osinbajo said a country as big Nigeria needs community policing, adding that it would be difficult for the Nigerian Police Force in its present form to fight crime in an effective manner owing to what he referred to as structural problems.

“We need to look at law and order. The question of policing our society, how do we police this country? At the moment we know that policing is ineffective.

Cracks In The APC Leadership Over Senate Presidency/House Speakership [Report]