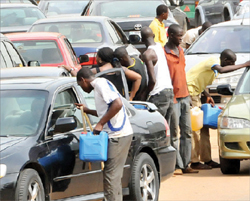 The unending fuel scarcity has continued to bite hard on motorists and users of the premium motor spirit (PMS) across the federation following long queues at the few stations that occasionally sell the product.

However, the Commandant General of the Corps, Dr. Ade Abolurin in line with the Corps’ mandate in curtailing the activities of illegal dealers on petroleum products have directed the Anti-Vandal Squad of the Corps to clampdown on illegal marketers of petroleum products, product diversion, unnecessary hike in pump prices and black marketers.

According to him, the persistent scarcity of the product gives room for the citizens to cast aspersion on the Government as if Government is not sensitive to the plight of the common man.

Therefore, he has directed that for the purpose of the benefits and dividends of democracy, all miscreants and those involved in hoarding of the product thereby causing artificial scarcity in order to sell at exorbitant prices should be arrested and prosecuted accordingly.

He reiterated that the clampdown will bring about sanity and availability of product at the various stations for legal sales to buyers at ease instead of selling to those that are likely to hoard the product in order to sell at inflated prices to desperate buyers.

In compliance to the directive, the Corps’ Anti-Vandal squad have since commenced raiding of the illegal hide-outs of those involved in hoarding and diversion of the product as well as black marketers.

Similarly, the Corps Chief Executive made a passionate appeal to the residents of Arepo and Ikorodu community respectively to cooperate and report appropriately activities of
vandals within their communities to the Corps for necessary action.

According to Abolurin, the only way to overcome the menace of vandalism is when the community members and stakeholders come together to synergise, cooperate and partner by sharing information and intelligence in order to clampdown on vandals and those involved in nefarious activities.

Remarkably, he stressed that if the residents can maintain surveillance of their environments and report back to the Corps in order to effect arrest and possible prosecution, it will reduce the act of vandalism within the axis.

He emphasized that the shootout yesterday at Arepo axis which led to the death of one resident and some others injured is uncalled for; also, the ugly incident demonstrated early this year where the Corps personnel were attacked by vandals, operational vehicles burnt and three personnel abducted which up till date have not been seen, calls for the effort of all stakeholders to be vigilant and work assiduously towards wiping out vandals.

Abolurin therefore, urged all stakeholders to partner with the Corps in areas where vandalism is prevalent and becoming critical as vandalism in the oil and gas sector is affecting others especially the Power sector.

In addressing this hydra-headed problem of vandalism of critical infrastructure and national assets, while meeting with the representatives of DISCOS, GENCOS, TCN and other stakeholders in the Power sector yesterday at the Ministry of Power, Abolurin in his effort to finding a lasting solution and new strategies in curbing vandalism, said collaboration of the public and stakeholders is the best antidote in solving the problem so that the dividend of democracy can be felt and enjoyed by all, particularly taking into consideration the effort and input of Government over time towards curbing and eradicating vandalism.

However, in swift reaction, the service providers all complained of the same problem of constant attack on their facilities by vandals and appealed to Government to come to their aid by providing communication centre and security in and around the installations.

The Honourable Minister of Power, Chinedu Nebo, who was represented by the Permanent Secretary, Godknows Igali said Power have dropped by 2,900 Mega Watts (MWs) due to activities of vandals, but with the effort of Civil Defence, there is a greater improvement.

The Commandant General further stated that, vandalism is a cartel and it has assumed a different dimension but with synergy of all stakeholders, it is summountable by the Corps if required logistics are provided such as social security and advanced technologies in addition to the earlier procurement made by the Corps.