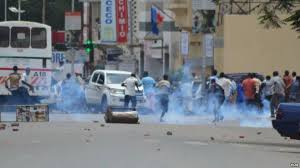 About two deaths have been recorded in violent clashes in Burundi, a day after President Pierre Nkurunziza launched his bid for a third term in office. Thousands defied a ban to take to the streets of the capital Bujumbura. Police shot live ammunition in the air to disperse them.

President Nkurunziza was nominated to run by his governing CNDD-FDD party while still serving as Chairman and was elected as President of Burundi. Opponents say it is unconstitutional and threatens a peace deal that ended the 12-year civil war in 2005. More than 300,000 people were killed in the war.  Angry protesters on Sunday threw rocks and lit tyres. Police responded with tear gas, water cannon and live ammunition, blocking access to the centre of the capital.

The Burundian Red Cross spokesman Alexis Manirakiza told reporters that at least five protesters were injured in the clashes and that one was in a coma. Many demonstrators have been detained. Police also threatened to shut down a private radio station unless it stopped live broadcasts about the protests. At his nomination by a special party congress, President Nkurunziza said: “I call people to go to the election in peace.

“But I would like to warn everyone: Whoever wants to create problems with the ruling party elected by the people, he’ll find himself in trouble,” he added. Mr Nkurunziza has served two terms as president, coming to the office at the end of the civil war. Burundi’s constitution only allows the president to be elected twice. But Mr Nkurunziza’s supporters argue he is eligible for another term since he was appointed by parliament in 2005.

Breaking: Many Killed As Bridge Constructed By Governor Rabiu Kwankwaso Collapses In Kano