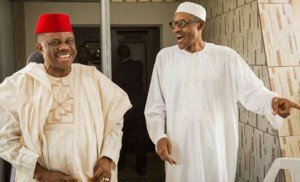 But speaking to Journalists at the premises of General Buhari, after a closed door meeting, the governor said that his mission to the president-elect was to congratulate him.

He said he was still in APGA but would work with Buhari, dismissing insinuation of defection.

“It is not correct. I will remain with APGA and work very closely with Mr president”, he said.

The journey was to also reassure Buhari of the support of the south east even as he asked the president-elect not to isolate Ndigbo in federal appointment.

Obiano also made a case for the incoming government to build a second niger bridge.

He said: “Well, I came to congratulate His Excellencey the President -elect on his victory and I am also here to reassure him that Anambra and the south East would support him. I also pleaded with him on some pressing problem that are of importance to the south east like the second Niger bridge and some of the federal roads.

“We also pleaded in the area of appointment for the people of Anambra and of course for people from the south East be it ministerial, ambassadorial and what have you. So basically it is to congratulate the president elect on his well deserved victory.”
Asked if he aligned himself with the new song of change, he said “Well I am a very focused governor. Under my tenure I brought change in the area of security in Anambra state and I will always support things that would bring change to improve the well-being of Ndi Anambra and Nigeria as a whole. So yes.”

The Governor also stated that he was in touch with APC leaders from the South East.

“Yes most of them have actually paid a courtesy call on me and yes we are talking and I suspect that the President is not going to give appointment to only people from his party because everybody would support him and so he has to consider people from the other parties so that we can all embrace the change”,he said.

It will be recalled that the member representing Ogbaru federal constituency, Hon. Victor Ogene who was denied a returning ticket on APGA platform recently vowed to frustrate Obiano’s movement into APC after defecting to the party.

“Is the man we are talking about not the one who, in the words of famed novelist, the late Chinua Achebe, had his palm kernel cracked for him by benevolent spirits, yet he refused to be humble. Where is former Governor Peter Obi? Where are the five House of Representatives members that Obiano inherited when he became governor? How many seats did he lead APGA to win in the just concluded elections? The questions are legion, yet very few optimistic answers”, he asked.