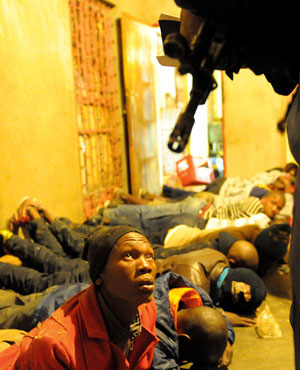 The President of the Nigerian Union in South Africa, Mr Ikechukwu Anyene, on Wednesday urged the Federal Government to help halt the xenophobic attacks on Nigerians in that country.

10 Nigerians are feared dead after angry South Africans launched a xenophobic attack on African migrants in Johannesburg on Friday April 10th. According to reports, 5 Gabonese, 10 Somalis and 5 Congolese students were also killed with some of their bodies set ablaze during the attack.

Anyene told the News Agency of Nigeria (NAN) on phone from Pretoria, South Africa, that the latest spate of xenophobic attacks began three weeks ago. NAN reports that there are more than 800,000 Nigerians living in South Africa.

Anyene said during the attacks in Johannesburg last week, shops owned by Nigerians were looted and their owners seriously injured by the attackers. He said the Nigerian Union in South Africa had been in touch with local chapters in some provinces and had urged them to take precautionary measures to save themselves.

Anyene said that since Nigeria and South Africa established diplomatic relations, there had not been a single incident of xenophobic attack against South Africans living in Nigeria.

Nigerians living in Durban, he said, had planned a protest march against the xenophobic attacks. He, however, said they were denied permit by the South African police.