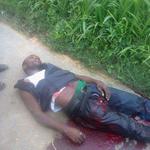 The All Progressives Congress in Akwa Ibom State has announced the boycott of the governorship and state House of Assembly elections in the state.

The decision by th party to call for the boycott and cancellation of the elections followed a reported widespread hijack of electoral materials by thugs and armed men.

The APC governorship candidate in the state, Mr. Umana Umana, said out of 1,571 registered voters, only 450 ballot papers were sent to his polling unit.

Meanwhile, at a polling unit in Akwa Ibom state, fierce-looking armed thugs were said to have stormed the place, carting away election materials.

The voters reportedly scampered for safety in fear of being shot. (Pictured voter shot in Uyo)