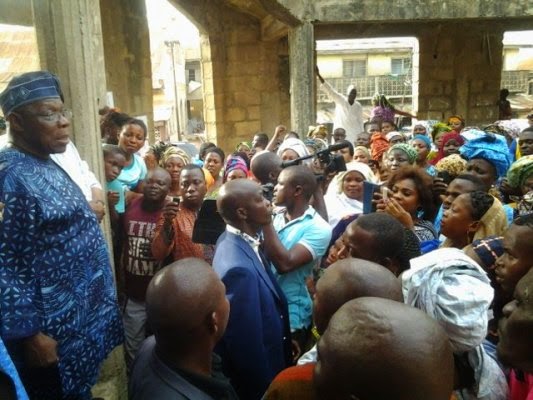 Former President Olusegun Obasanjo has called on Ogun market women to.come en masse on April 11th gubernatorial elections, to exercise their voting rights, just as they did during the presidential elections on March 28th.

Chief Obasanjo said this, on Saturday, as he stunned residents of Abeokuta, the Ogun State Capital, as he embarked on a visit to? the market to? celebrate the Easter with the traders.

Mr. Obasanjo made the surprise visit to the popular Itoku market in the town?,? moving from one stall to the next, greeting hundreds of traders and encouraging them to participate at the next poll.

Excited traders abandoned their shops to have a handshake with him.

As he went round stalls, he asked of the efficacy of some herbs from the traders and also tasted some ?of ?the herbs to convince the traders of his belief in the use of herbs.

Mr. Obasanjo later addressed the market men and women telling them to vote wisely in the next poll scheduled to hold on Saturday. He told them he was in the market to wish them happy Easter.

Finally, he asked them to conduct themselves in a peaceful manner like they did ?during the Presidential and National Assembly elections.

President-elect Buhari Calls On Nigerians To Tone Down Hasty Expectations