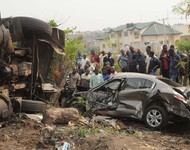 At least seven people were killed and 18 others seriously injured when a bus carrying wedding guests crashed into an armoured military vehicle in northeast Nigeria, an official said Saturday.

The accident occurred late Friday when the bus full of women and children returning from a wedding collided with the armoured military vehicle outside the town of Azare in Bauchi state.

“The bus driver lost control when one of the front tyres burst just outside Azare and collided with the armoured military vehicle coming from the opposite direction,” transport official Saidu Yusuf Funtua told AFP.

“We took seven dead bodies to hospital with 18 people injured in the accident. All the victims were from the bus,” he said.
Deadly accidents are common on Nigeria’s poorly-maintained roads, often caused by speeding, overloading or reckless driving.