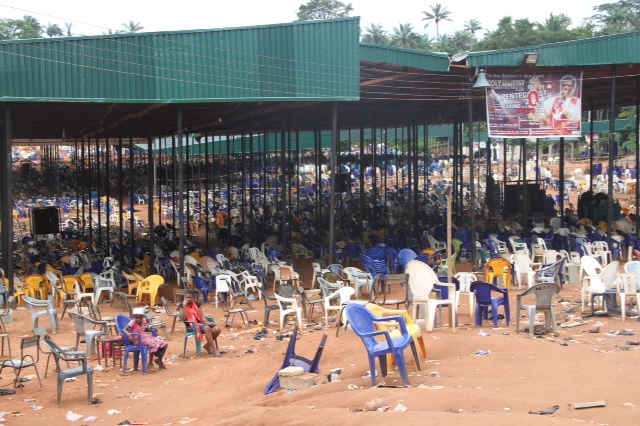 Catholic priest, Reverend Fr. Ejike Mbaka of Adoration Ministries, Enugu, has suspended his weekly crusade until after the general elections owing to alleged threat to life.This left no fewer than 100,000 worshippers stranded and disappointed last Friday. The Adoration Ground in Emene, Enugu, is noted for attracting over 100,000 worshippers every Friday from the South-East zone and beyond for spiritual healing and deliverance from satanic attacks.It would be recalled that Mbaka had in a statement signed by his Media Officer, Ike Maximus Ugwoke, stated: “It is with a deep sense of concern that we are constrained to make this statement on the continued threat to the life of Rev. Fr. Ejike Mbaka over his 2015 New Year message titled ‘From Good Luck to Bad Luck.’ “Last Wednesday, mean looking men in a black Hilux besieged his parish compound but they left disappointed when they could not see him”.A visit to the Adoration Ground, on Friday night, revealed how the place was deserted on a day when it usually houses lots of worshippers. The Police Public Relations Officer, Mr Ebere disclosed that , “we do not have any report by Fr. Mbaka over threat to his life,” dismissing the claim as baseless.