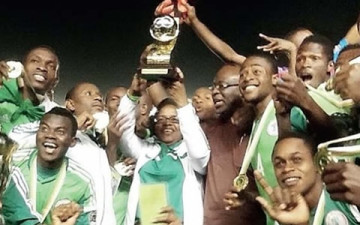 The Flying Eagles of Nigeria defeated Young Lions of Senegal 1-0 to win the 20th edition of the African U20 Championship played on Sunday night at the Stade Léopold Sédar Senghor in Dakar.

A first half wonder strike from Bernard Bulbwa was all the highly-talented Nigerians needed to seal a seventh title on African soil. The technique and execution would have surely impressed the King of audacious goals, Zlatan Ibrahimovic.

It was the second time both teams would be meeting in the tournament and the hosts came into the game with the intention of avenging their 3-1 defeat to the Nigerians in the opening day of the competition but were halted by goalkeeper Joshua Enaholo’s brilliance.

A lone goal from Bernard Bulbwa handed the Nigerians their fifth win of the tournament.

Coach Manu Garba named the same side which defeated Ghana 2-0 in the semi-finals with all players retaining their starting roles.

It was a tale of missed chances for the Senegalese, who were searching for their first continental title. They attacked from the first blast of the whistle and almost went ahead in the fifth minute when goalkeeper Joshua Enaholo saved Malick Niang’s header from the first corner kick of the game.

The physical Senegal side pegged the Nigerians in their half and came close again in the 10th minute when a defensive error freed Malick again with Enaholo to beat but the keeper saved his effort.

In the 15th minute, the Young Teranga Lions came close to scoring again but Malick could again not direct his header towards the Nigerian goal.

Against the run of play, Nigeria took the lead in the 19th minute when Bulbwa right footed a shot from outside the penalty area into the top right corner of the Senegalese goal after a long ball from the defence.

Senegal thereafter searched for the equaliser and almost got it in the 27th minute but the header was saved by Enaholo, who was the busiest of the two keepers. But the Flying Eagles survived another scare in the 40th minute when Mouhamet Sane struck the upright with a header from a Sidy Sarr corner kick.

The second half began with Nigeria attacking for their second goal and in the 59th minute, Bulbwa’s shot from a Musa Muhammed free kick was saved by goalkeeper Ibrahima Sy.

Senegal continued the search for an equaliser but the Nigerian defence and Enaholo denied them chance after chance while Nigeria also had several chances from Taiwo Awoniyi and Ifeanyi Matthew saved by Sy.