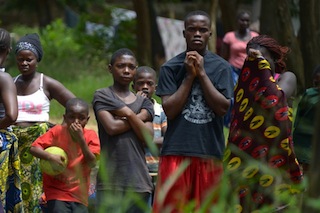 Liberia Friday confirmed its first new Ebola case in more than a month in a setback to hopes the country would soon be officially declared free of the deadly disease.

The country was the hardest hit at the peak of the epidemic in west Africa and has seen more than 4,000 deaths in all, but was at an advanced stage in its recovery and was expecting to be declared Ebola-free by mid-April before the latest case in the capital Monrovia.

“A woman has been confirmed as an Ebola patient… This is a new case after we have gone more than 27 days without a single case. It is a setback,” government spokesman Lewis Brown told AFP.

The World Health Organization (WHO) announced earlier this month that no new case of the deadly virus had been registered in Liberia since February 19.

It was not immediately clear where the new patient became infected, as all contacts associated with the last known chain of transmission completed the 21-day observation period during which symptoms of Ebola are exhibited, according to the WHO.

A source close to the case, speaking to AFP on condition of anonymity, said the woman was the wife of a cured Ebola patient.
According to experts, a patient can still transmit the virus through sex days after being cured.

Surveillance and early warning systems had detected 125 suspected cases in the week to March 15 but none tested positive for Ebola.
Since the outbreak began in December 2013, 24,753 people in nine countries have been infected with the virus, and 10,236 of them have died, according to the latest figures.

All but 15 of those deaths have occurred in Liberia and its neighbours, Sierra Leone and Guinea.

But the tide seemed to have turned in Liberia, which six months ago was reporting more than 300 new cases a week and which still counts the most deaths in the outbreak with 4,283.

The country discharged its last confirmed Ebola patient, Beatrice Yordoldo, on March 5, two days after she tested negative for the virus for the second time.

The country started its 42-day countdown towards being considered Ebola-free on March 4 and would have been clear by April 15 — the much-touted “zero Ebola” deadline announced by the three countries.

While the new case will be a worry for the government, Liberia has nevertheless been leading the recovery.

The outlook has been mixed in Guinea and in Sierra Leone, the latter of which has announced a three-day lockdown of around 2.5 million people at the end of the month in a bid to stem the epidemic.

Sierra Leone counts the most cases of the virus at 11,794, but only 55 new confirmed infections were registered last week — the lowest number since last June.

WHO chief Margaret Chan said on Wednesday the country had made “tremendous progress”.

There were 95 new confirmed infections in Guinea, however — the highest weekly total for the country this year.

Continued resistance within communities in Sierra Leone and Guinea to measures taken to rein in the outbreak is said to be threatening progress.

In both countries some Ebola patients are still not being isolated and treated, while some unsafe burials of the highly contagious bodies are still going on.

There is no licensed treatment or vaccine for Ebola, and the WHO has endorsed rushing candidates through trials in a bid to stem the epidemic.
The first large-scale trial of an Ebola vaccine began in Guinea two weeks ago, after a similar test kicked off in Liberia.

The phase III testing of the vaccine — one of two that are in the most advanced stages of development — aims to ensure it provides protection against the virus.

Researchers have said it remains unknown what level of immune response is needed to protect humans from Ebola, which causes often fatal haemorrhaging, organ failure and severe diarrhoea.

Cracks In The APC? You Should Read Why Atiku Has Not Been Part Of Buhari’s Campaigns [Fmr VP BBC Interview]