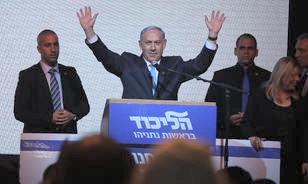 Israeli Prime Minister, Benjamin Netanyahu beat the odds on Wednesday to win a resounding election victory, as his party, the Likud Party pulled clear of closest rivals at the just concluded elections in Israel.

With nearly all of the votes counted, his rightwing Likud party was seen taking 30 of the Knesset’s 120 seats, with the centre-left Zionist Union a distant second on 24.

According to Jerusalem post, with 95 percent of votes counted, the president’s Likud party has emerged as winner of the keenly-contested poll.

“With nearly 95 percent of precincts reporting before dawn on Wednesday, the Likud has emerged as the clear, undisputed victor in the elections,” the Israeli media said. “According to the official up-to-the-minute tally, Likud wins 29 seats while Zionist Union comes in second at 24 seats.

In elections in Israel, votes are not cast for individuals but for political parties, and the party that wins the majority seats and in position to put together a 61-seat majority with coalition parties would have its leader become prime minister.

“We have scored a major victory for the nationalist camp headed by Likud,” he said. “I’m proud of the Israeli people because at the moment of truth they knew to differentiate between challenge and nonsense and they took up the challenge.

“These are important things for every family, citizen, soldier, and all of Israel’s Jewish and non-Jewish citizens; you are all important, and you are all important to me. “Now we must form a strong, stable government that will know how to uphold security and socioeconomic well-being. We are faced with major challenges on the security and socioeconomic front.”

Isaac Herzog, Zionist Union leader called Netanyahu on Wednesday morning to congratulate him on Likud’s win. With Netanyahu clinching his fourth term, and having served as Prime Minister fro. 1996 to 1999 and from 2009 till date; he is on track to become Israel’s longest-serving prime minister, a feat currently being held by David Ben-Gurion, Israel’s first prime minister.

Disheartening! Military Still Has No Clue As To Whereabouts Of Chibok Girls; 338 Days After School Girls Were Abducted