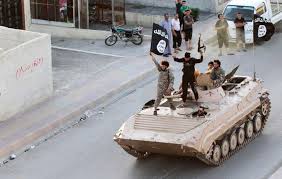 A Chechen woman living in the Netherlands has taken her two young children against their father’s will to join the Islamic State group in Syria, in what is believed to be the first such case, prosecutors said on Monday.

The unnamed 32-year-old refugee flew with her children, a boy aged eight and a girl aged seven, from Charleroi in Belgium to Athens in November, possibly using false passports after their Dutch father warned police of their imminent departure.

“She is most likely in Syria now. We are probing a kidnapping case,” public prosecution spokeswoman Elsbeth Kleibeuker told AFP, adding that an international detention request had been issued for them.

The Chechen woman and her children, who are Dutch nationals, were photographed as she withdrew cash from a cash machine in Istanbul in mid-December, the Dutch Limburger newspaper reported on Monday.

On December 28 she posted a picture on Facebook, believed to have been taken in the Turkish-Syrian border town of Tell Abiad, which is controlled by the Islamic State group.

In early January, she phoned her mother in southern Dutch city Maastricht and told her that she was in the IS stronghold of Raqqa, after which nothing further has been heard.

“The mother has taken the children against the wishes of her ex-husband, who has custody,” said public prosecution service spokesman Bart den Hartigh.

“Unfortunately there’s very little we can do (if they are) in Syria,” he told state broadcaster NOS.

Nine of these were from Limburg province, including six from Maastricht, news reports said.

Their number included a young Dutch girl called “Aicha”, who was dramatically rescued by her mother from Syria last year after the teen travelled there to marry a jihadist fighter she saw as a Robin Hood figure.