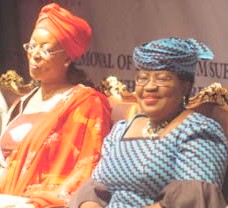 Vice Chairman of the House of Representatives Committee on Petroleum Resources, Moshood Mustapha, has criticised the Minister of Finance, Ngozi Okonjo-Iweala, and her Petroleum Resources counterpart, Diezani Madueke, for refusing to release the forensic audit report on the operations of the Nigeria National Petroleum Corporation, NNPC.

Mr. Mustapha, a member of All Progressives Congress from Kwara State, faulted the continued delay of the report, being publicised and faulted both the Coordinating Minister for the Economy and the Petroleum Resources’ Minister.

The audit, undertaken by international firm PriceWaterHouseCoopers, indicted the NNPC and recommended that the national oil company refund about $1.48billion to the Federation Account for various unreconciled transactions.

The investigation was carried out over claim that $20 billion oil money had not been accounted for the government-owned company.

The Nigerian government has refused to make the report public despite public outcry. President Goodluck Jonathan only ordered the release of a “highlight” of the report early February, several months after the completion of work by PwC.

Analysts believe the report contains far more serious indictment than reflected in the “highlight”, hence the government’s decision to keep the document under wraps as a crucial election approaches.

In February, Ms. Alison-Madueke said the report will not be published ahead of the elections because Nigeria’s “rabid opposition” will find “all sorts of minute detail (in the full report) to create concern.”

Mrs. Okonjo-Iweala and Alison-Madueke have refused to release the report despite a one-week ultimatum by the House of Representatives.

Mr. Mustapha condemned the refusal to publish the audit report, describing it as “part of characteristic impunity that defines this government”.

“A minister will feel she can do anything since she has a president that tolerates corruption or when she can go to the judiciary for injunctions to prevent the legislature from doing their constitutional work,” he said.

“Even if she does not honour the ultimatum issued to her to submit the audit report, we could have asked the police to arrest her but is the police independent under this administration to act rightly? But then, we allow Nigerians to see and judge them. And that’s why change is imminent come March 28. It’s not about Sarakis, Buharis, Ameachis but Nigerians’ determination to stop impunity and misgovernance,” he said.

He added that, “it seems to me as insanity when a government sees constructive criticism of the opposition as frustration. For me criticism from APC should make the PDP government more hardworking and do better in terms of governance, having had the consciousness some people are there to check them. Democracy as well as good governance is not possible without viable opposition,”

Mr. Mustapha said the current setting of Nigeria’s petroleum industry is characterised by a lack of transparency and accountability. This, he said, denies the government and citizens “huge funds that should have been freed up for developmental purposes.”

“Let me give you an example which many find inconsequential but which in reality affects our development drive in this country. The funds meant for operation of Petroleum Trust Development Fund (PTDF) are not being remitted. With that, many of our citizens on scholarship abroad have been abandoned and not been funded adequately. Similarly, PTDF has been stifled and finds it difficult to perform its even domestic obligations in different areas including education which is the bedrock of any development,” he said.

Responding to the question of solution to the absence of accountability and transparency in the petroleum industry, the lawmaker said, “The way out is to have the Petroleum Industry Bill in place. “

“It is to regulate the oil and gas industry and promote transparency, accountability and best practices. It will also reform the regulatory, structural, commercial, as well as the fiscal framework of Nigeria’s petroleum industry in order to stop the mismanagement, inefficiency and lack of transparency that characterise the sector.”

He said the National Assembly was careful in passing the law to ensure Nigerians are given the best provisions.

Kogi State Workers To Get Half Salaries, As Economic Realities Bite On State Allocations