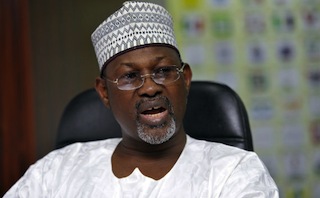 The  Independent National Electoral Commission Chairman, Attahiru Jega, on Wednesday lamented that a “lot of things” were designed to distract INEC from making the March 28 and April 11 general elections a success.

Jega, at a meeting with the 37 Resident Electoral Commissioners in Abuja, however gave an assurance that Nigerians’ aspiration for   free, fair and credible elections, would be met.

His comment came a day after the Peoples Democratic Party governors said that the commission was ill-prepared for the polls.

Critics of INEC’s card readers, including the PDP governors and the national leaders of the ruling party had   claimed that the device could result in the disenfranchisement of eligible voters on the days of the elections.

Jega, who spoke before the meeting went into closed-door session, said that the commission would examine every gap in its preparations for the elections in the next few weeks.

Facing the RECs, he said, “This is a very challenging time for all of you as we put final finishing touches to our preparations for the   2015 general elections.

“This meeting is very important because it is an opportunity for us to   have a final review and updating of the extent of our preparations for the elections.

“It is important that we also remain focused in terms of delivering the best elections for our country. There are a lot of things to distract us but we need to remain focused and resilient.

“We need to do everything possible to make sure that the elections scheduled for March 28 and April 11   are indeed substantially much better than those we conducted in 2011 and the subsequent by-elections in some states.”

He called on the electoral officers to continue to engage all stakeholders, by giving them information, enlightening them and carrying them along in all their actions.

The chief electoral empire said this was necessary because, according to him, the contribution and support of everybody were necessary in order to have the best elections that Nigerians want.

On the agenda of the meeting, he said, “I want to say that at today’s(Wednesday) meeting, we will review outstanding matters relating to the distribution of Permanent Voter Cards, relating to the relocation of polling units and relating to the field testing or mock demonstration of card readers that we did last Saturday.

“And of course, it will be an opportunity for us to examine closely whether there are still gaps in the final things that we need to do within the next two weeks to keep on adding value to the elections.”

While giving an assurance that the commission was doing its best to conduct free, fair and credible elections, Jega added that all Nigerians must be ready to contribute their quota.

He called on political parties and their candidates to abide by the peace accord they entered into, which is meant to avoid violence by their supporters.

Jega said, “I want to use this opportunity to reassure all Nigerians that we   are doing our best and our best will be good enough in terms of meeting their aspirations and in terms of free, fair and credible elections.

“But as we have said constantly, everybody has a role to play in ensuring free, fair,   credible and peaceful elections. In particular, we want to urge the candidates and their political parties to contribute and engage in the process, within the legal framework and in the context and code of conduct which they have all signed.

“We all need to ensure that the elections are peaceful, because peaceful elections are what will promote the stability of our country and what will lay a solid foundation that is required for development.”

The commission is expected to meet with representatives of all registered political parties on Thursday (today) over issues like the use of card readers and the distribution of PVCs.

Meanwhile, as the Wednesday meeting was ongoing, a group of protesters gathered outside the commission’s premises to kick against the use of the card readers for the elections.

The protesters, who are under the aegis of the Middle Belt Concerned Youths,   were however restricted from gaining access to INEC headquarters’ gate by security men.

The leader of the group,   Yusuf Amodu, told journalists that the mock election conducted by INEC revealed that the card readers were prone to fraud and capable of causing   problems on election days.

Okorocha Alleges Fresh Plot By The PDP To Halt Polls