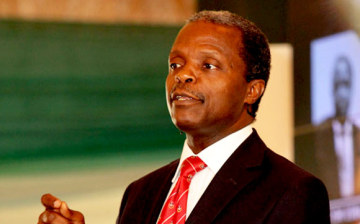 The vice presidential candidate of the All Progressives Congress, Prof Yemi Osinbajo (SAN), on Friday evening in Abuja said his party would only accept the outcome of the March 28 presidential election, provided the election is free, fair and credible.

According to him, the party is not bothered by the threats by 15 political parties to pull out of the election over the use of card readers.

He spoke with journalists after being a guest at the Catholic Social Forum with the theme: “Promoting the Culture of Violence-Free Elections in Nigeria.”

He said the use of card readers by the Independent National Electoral Commission was not electronic voting as being painted by some people.

Osinbajo maintained that APC was not afraid of threat from any quarter, adding that the party was interested in the use of card readers to ensure credible election.

He stated that the party would not accept the outcome of anything short of free, fair and credible polls.

He said, “We (APC) are not bordered by the threat to pull out of the election by any party, it is their choice to participate. We want credible election. We want to ensure that all PVCs are genuine, we don’t want rigging.

“We have confidence in God, we are ready to accept the outcome of the election provided it is free and fair; we expect that this election must be free and fair and that is why we are taking all these troubles, as we are educating our people.

“Don’t forget that under the same INEC that is now being feared by PDP, our party lost election in Ekiti and Anambra. In 2011, it was the same gentleman (Attahiru Jega) that conducted election, we went to court, contested it, but all of a sudden the same PDP said they are jittery. If the election is not free and fair, we know the right and constitutional thing to do.”