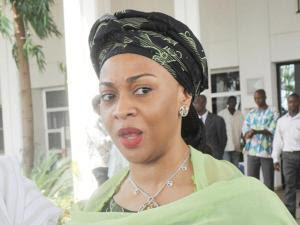 The Kwara State chapter of the Peoples Democratic Party, PDP, has appealed to former senator Gbemisola Saraki to shelve her alleged plan to dump the party. This is contained in a press statement issued by the party’s secretary in the state, Barrister Hassan Razaq, in Ilorin on Monday.

However, her rejection of the fifty thousand naira allegedly made available to her to mobilise her supporters to the last visit of President Goodluck Jonathan to Ilorin and her abscence from the event further fueled the specualtions.Senator Gbemisola Saraki has denied having plans to leave the PDP. The party’s secretary in the statement said, “Although we are relieved by the assurance that the rumour of the possible defection of Sen. Gbemi Saraki is false and unsubstantiated, nevertheless, we consider it expedient to implore Senator Saraki and her teeming supporters not to allow the voices of division to overwhelm them.

“At this critical time in the life of our party in Kwara State, we believe that all hands must be on deck to sustain the party and lead it to victory in the forthcoming polls. “We believe Senator Gbemi Saraki has made invaluable contributions and sacrifices for the PDP in the state and beyond.

“We particularly noted her maturity and sportsmanship before, during and after the party primaries which produced distinguished Senator Simeon Ajibola as the party’s governorship candidate.”

Falana Faults Afenifere’s Endorsement Of Jonathan; Urges Group To Speak For Themselves, Not Entire Yoruba Nation