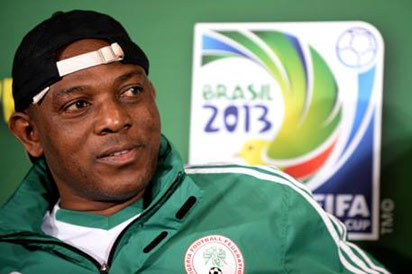 It would be recalled that, NewsWireNgr brought you, a report of how the NFF had reacted bitterly to Keshi’s allegations that he is being offered a ‘slave contract’.

Keshi’s agent, Addo, has responded that his client, has not officially refuted the contract being offered him, by the Glass House.

“It’s not true. I didn’t grant any interview to anyone or any wire agency on the contract,” a very furious Addo declared to AfricanFootball.com. “This is sickening, very sad and upsetting my stomach.” Keshi has been far from happy with the contract he described as a “slave contract”, but a final decision on whether to accept it or not has not yet been taken.Addo further clarified to AfricanFootball.com: “This is a contract and you need to go through it thoroughly. “The NFF expects us to revert to them on the contract and we have handed it to our lawyers to look at it. And a report from them would be sent to us before we respond to the NFF and I think that is the way to go.”

He added, “Anyone that has spoken privately to me knows my position on the contract but you know everybody tailors a contract to suit them, so I think that is what the NFF did and it’s up to us to now look at it make out points known and if it does not work, we shake hands and part ways.”