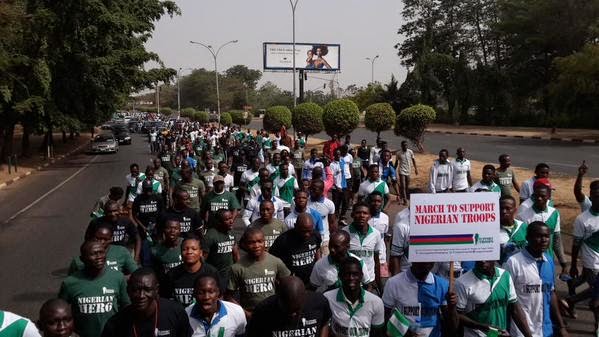 Nigerians in their large numbers marched in solidarity to honour the army and regional forces fighting Boko Haram in the northeast, while the support was ongoing thousands of Cameroonians in Yaounde also stood up, rising in support for their troops on Saturday.

Channels TV reports that the march was organized by Support Our Troops Foundation.

They were motivated to hold the march due to the recent progress the army have made in the fight against the terrorists – especially reports of reclaimed territories by the troops.

The foundation expressed its hope that the march would boost the morale of the soldiers.

Nigerian Army spokesperson, Chris Olukolade, was present at the march, and he expressed his appreciation to all who participated in the march, promising that “never again will reclaimed territories fall to the insurgents.”