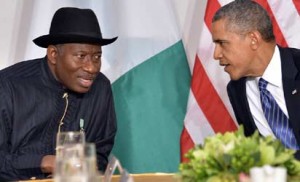 The “Dem Say Na Lie” Advert brings to bear the Economic Achievements of the President Goodluck Jonathan led government which includes the rebasing exercise, the Economic diversification spearheaded in the Agriculture sector by Akinwumi Adesina ‘Forbes man of the Year 2013’, something that has seen Nigeria attracting the largest Rice Processing Factory in Sub-Saharan Africa (Olam Factory in Nassarawa State), the Foreign Direct Investment in Critical sectors like Power such as the $1bn General Electric Power Plant in Calabar, the revival of manufacturing sector with Nissan, Hyundai owning manufacturing and assembly plants in Nigeria, including our very own Innoson Factory in Anambra with cars patronized by Jonathan’s government to boost local production.

A transcript of what the American President, Barack Obama said….

“Well, I appreciate very much the opportunity to meet once again with President Jonathan and his delegation.? Obviously, Nigeria is one of the most powerful and fastest-growing countries in the world.? I think that’s testified by the fact that President Jonathan is going to have the opportunity to ring the bell at the New York Stock Exchange.? (Laughter.)? I think it signifies how important Nigeria is becoming in the global economy.” – President Barack Obama (New York -?September 23, 2013)

And opposition candidates comments in Chatham House UK was also highlighted by the Goodluck/Sambo campaign team… “After the rebasing exercise in April 2014, Nigeria overtook South Africa as Africa’s largest economy. Our GDP is now valued at $510 billion and our economy rated 26th in the world. Also on the bright side, inflation has been kept at single digit for a while and our economy has grown at an average of 7% for about a decade.”?- General Buhari (Chatham House, UK February 27, 2015)