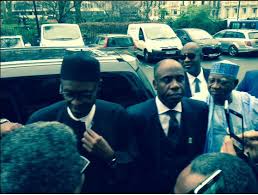 A civic action and pressure group promoting democracy, good governance and transformation agenda, has described the lecture delivered by General Muhammadu Buhari (retd) at Chatham House, yesterday, as windy and full of lies.

In a statement in Abuja by the group’s National Coordinator, Mr. Clem Aguiyi, it argued that the lecture by the All Progressives Congress, APC, presidential candidate “would have passed for a well-crafted speech if he was a first timer and we are ignorant of his antecedent and reputation.

“But because this will be his second tenure as president assuming he succeeds, having served first as a military dictator, we are fully aware of his reputation no matter how he tries to run away from the past.”

According to the group called Move on Nigeria, “for the first time in three decades, Buhari accepted responsibility for the ills of his military regime, which include jailing of Pa Ajasin, even after the military tribunal had discharged him of all corruption charges.

“He held Dr. Alex Ekwueme in captivity throughout the period of his 20-month regime, even when no crime is traceable to him and he detained the late Igbo leader, Emeka Ojukwu, who held no political office.

“It is not for Buhari to determine when Nigerians will forgive his sins. He was offered the opportunity during the Oputa Panel, which he missed.

“It is regrettable that Buhari wasted the opportunity provided him by the Chatham House to, at least, address issues bordering on restructuring and the Boko Haram insurgents, whom he clearly refused to identify as Islamic extremists.”